Is training the ultimate tool for transportation? Yes, at least when asking employees: Because according to a recent study, they are keen to develop their skills further. This is not really a surprise - the question of who should finance this would have been more exciting. Obviously the respondents see their employers as responsible. 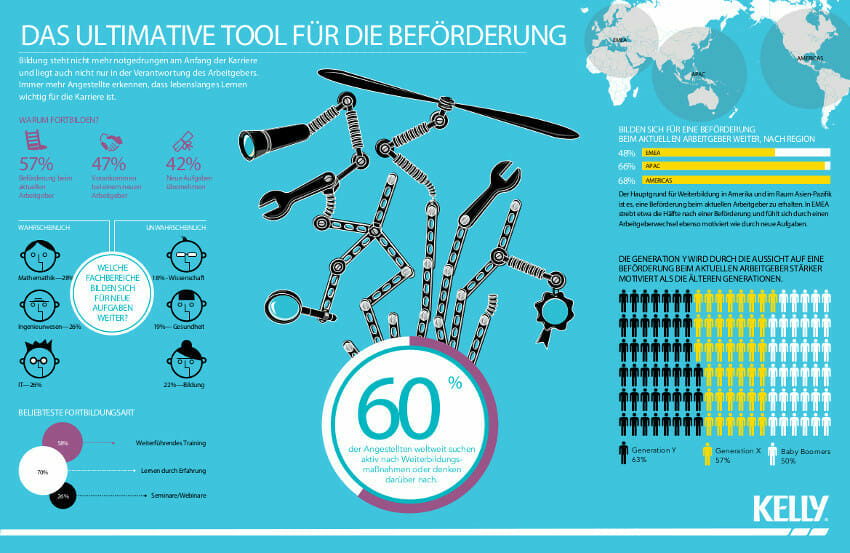 The Kelly Global Workforce Index is an international study that examines the views of participants in the labor market on work and employment. The results are published on a quarterly basis in Europe, North America and the Asia-Pacific region.

For the current Global Workforce Index, almost 120.000 persons were interviewed in 31 countries, including 1.400 in Germany. The survey was conducted between November 2012 and January 2013.

Exciting is the study above all, because here also cultural characteristics of the Germans can be read out: Further education yes, but it should take care of the boss drum. No initiative! And certainly not self-financed training!

Also that learning from experience does not show so much, the german special feature manifests, that in this country it depends more on bills and qualifications than on contents.

Continuing education as a career springboard

In Germany, continuing education is seen above all as the pragmatic aspect of the career ladder: According to this, 22 is looking for a percentage of respondents specifically for opportunities for training or other training.

Another 35 percent think about optimizing their knowledge and skills. The aim of both groups is to qualify for new work areas and tasks.

Demand for further education is also high on an international level, with the Germans on average. However, with 61 percent, they are much more important than their international counterparts to develop within their company:

Only 42 in the world and 44 Prozent in Europe are pursuing the goal of developing new areas of work here. For this reason, the proportion of those who want to use additional qualifications primarily for their own business start-ups is much lower in 14 percent in Germany than in global ones - here it is a fifth.

What further training is required?

As a concrete form of further training, seminars are popular in Germany: A total of 63 percent prefer to attend a seminar offer. Internationally, 26 percent of respondents share this predilection.

Another difference is that learning by experience does not seem as important for German employees as it is for their colleagues in other countries. For example, 58 percent believe that professional experience is a key element in developing competences, but the international figure is 70 percent.

Also, 'Soft Skills' are in demand Apart from professional qualification and further education, employees also need social skills for a successful career in their own estimation Company .

The most important are the teamwork and the ability to cooperate (79 percent), communication skills (73 percent), detail accuracy (72 percent) and the ability to actively listen (70 percent). Last but not least, 87 percent see good English as a prerequisite for success.

Pious wishes to the boss

Many employees who are willing to continue to work seek new jobs in their company, so they see their future with their current employer. From the employees' point of view, however, the boss could do more than at present:

Asked whether the existing offers were suitable for accelerating one's own professional career in the company, 23 percent agreed in Germany. 26 percent had no opinion and 36 percent even had a completely different opinion.

For me a sign that you could have saved the whole survey: It is of course nice if the employees are willing to further training. But why even talk about training at all, if it is not carried out at the end for want of (own) financing? At the same time, state funding is available in Germany.

No wonder then that the survey in Germany is in clear contrast to the international result: Both worldwide and in Europe were over 50 percent satisfied with the existing training opportunities, dissatisfied showed only each 14 percent.