There are beautiful, well-made advertisements - and there are deliberately tasteless, misleading advertisements. An overview of some examples. 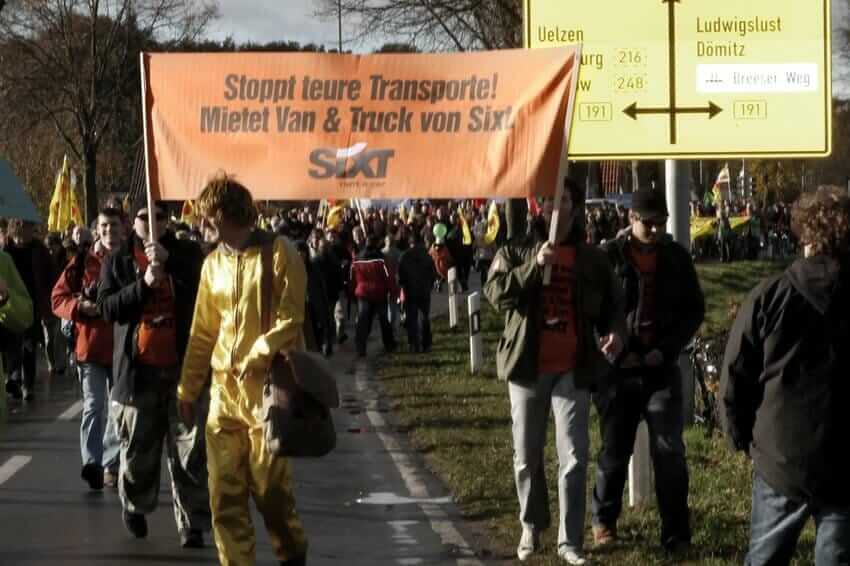 Since yesterday, protesters have been trying to stop the Castor in the Wendland and take part in serious blockages in the case of seat blocks. Now, one may think of the idea as to what one wants, there are even people who think that the demonstrators are themselves to blame, others have understood how important it is to put a sign here.

Now you can stand by how you want it: I thought it was blatant, what makes automaker Sixt out of it: The anti-Castor demonstration on Saturday they used as a forum for their gurilla marketing campaign. Here are a few photos: 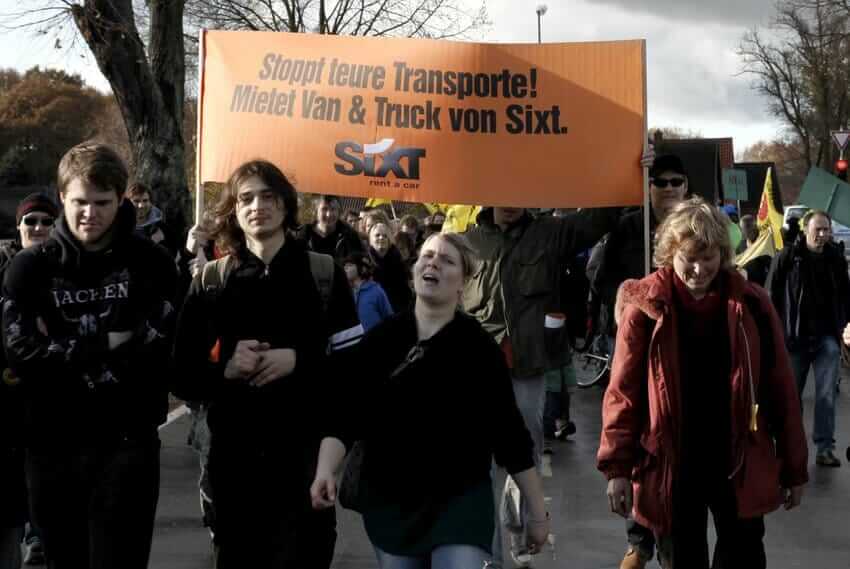 Communication consultant Tapio Liller posted the video of the campaign on his blog and commented on it and discussed it objectively, although he personally distanced himself from the campaign, but nevertheless provided an accurate analysis:

“But Sixt has never been interested in political correctness in advertising. It is part of the concept to cross borders and to link them with the brand at first glance. There is always a bridge. I doubt that the protesters in the Wendland were actually the addressee of the action. From a moral point of view, it is used to convey a very simple message: Sixt is cheap. In my memory, Sixt has never shown solidarity with any political goal. Why also, if it is the fun fraction on the net - and in my opinion that is the main target group - that it is fun. You can find that reprehensible and tasteless, but it won't hurt the brand in the long run. " 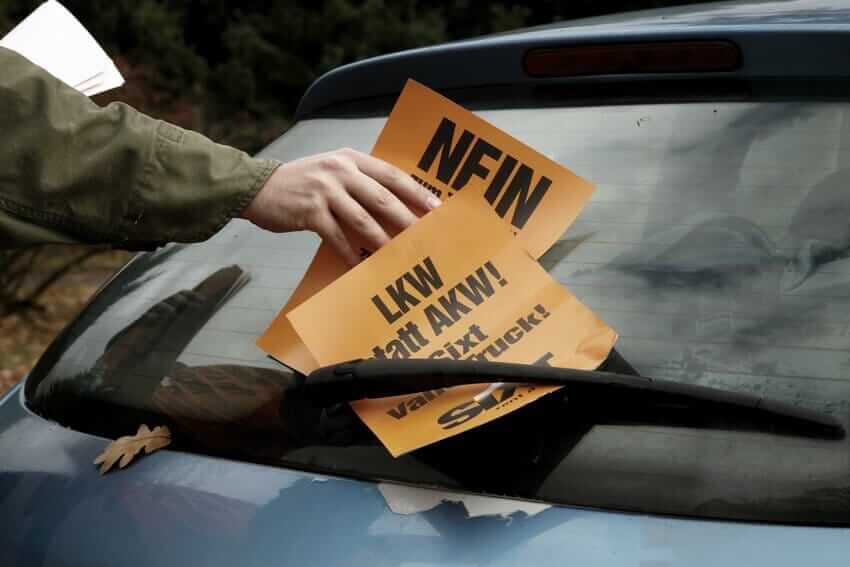 Sixt has thus achieved above all: attention in the net. Also on Twitter! One can see very nicely how the mood in the net gradually changed: First of all, only experts discussed the action from Werbersicht positively or neutrally. It was only gradually that more and more negative and despicable voices joined the Twitterstream.

A really constructive comment comes from @Wissensagentur. She writes: “It would have been brave: 'not even sixt would transport it'”

Pretty much lost in the whole Sixt outrage another advertising detail, the ZEIT ONLINE works in collaboration with Google - albeit unintentionally, and drew the attention of Jakob Fricke:

In einem Article to the anti-nuclear protests in Wendland, automated by Google Adsense, for batons and stun guns. Of course, this is anything but appropriate in this context, but shows once again how difficult automated advertising can be - I have already dealt with this in detail in this article.

Apparently it is also different: The advertising, which now appears under this article, is absolutely appropriate!

I admit that I also check the PR database for reports that are worth publishing. But there is not much there, most companies have not yet understood that information about them is not worth a line to most media. What is particularly interesting is useful information, that is, texts in which readers also get added value and the actual PR only runs along the way. In the press release from http://www.myonid.de I thought it was exactly that. Although the topic of online reputation management is not new and there are already a number of services available, on the other hand it is a topic about which one cannot write enough about the constantly lurking dangers. So potentially interesting - I thought. And then this: “If you want to make a career, you have to pay attention not only to your good reputation in real life, but also on the Internet…!” Well, the start could be livelier. That is already well known. Often something new please. And this is how it goes on:

At http://www.myonid.de, the platform for identity and reputation management, everyone can present their online personality professionally in a profile and thus increase their career opportunities. To this end, myON-ID Media GmbH has further developed and greatly expanded its platform into a “meta social network”. myonid.de serves as an identity center in which everyone can observe, manage and market their online content and activities. Via the integrated social media monitoring, he can find information that is available on the Internet (e.g. Twitter, YouTube and Flickr) and present it centrally. Every user can freely design the layout and structure of his myON-ID profile. Premium users can also book a desired domain and switch off advertising. myON-ID supports open standards for data exchange. In this way, users can make their online identity bundled on myonid.de available to other websites. Wait - that has nothing to do with reputation management. This is another of the myriad forms of social networking. What is the difference to Xing or Facebook? The next logical step is:

This open approach differentiates us from other social networks. MyON-ID also provides its users with their own OpenID. With this you can register in other services without creating a new password. Data such as name and profile photo can be transferred on request. Ok, is that different from Xing? But isn't it the same as Facebook? The business model of myON-ID Media is based on the “freemium approach”: the free basic functions can be expanded with premium services (EUR 5,99 per month). MyON-ID is also financed by advertising. The profiles of premium users remain ad-free. Ah .. a kind of Facebook, only with payment like Xing without advertising. Well, apart from the fact that I don't understand what should be different about it: It probably doesn't have much to do with reputation management. The term is simply wrong. The user accounts of existing online profiles can certainly converge in such a platform. So much for the theory. In practice, this usually does not work because there are always interfaces that do not match. This is known from Facebook, for which there are a large number of such applications, many of which then do not work. The function would actually be useful if it could also be used to delete incorrect information that is available on the Internet. However, this will hardly be possible because it is technically simply not feasible. Anyone who practices genuine reputation management, ie wants to organize existing data on the Internet, must continue to take care of it themselves or commission a corresponding service to do so. Nice try to start a current discussion with an old idea.

Berlusconi as an involuntary advertising star

I like Italy very much - but Berlusconi? The good man has often put himself in the nettles - most recently because he attacked publicly in a talk show and abused the moderator. It's no wonder that the animal protection organization Peta made the Cavaliere the victim of its mockery - and an advertising star against its will. 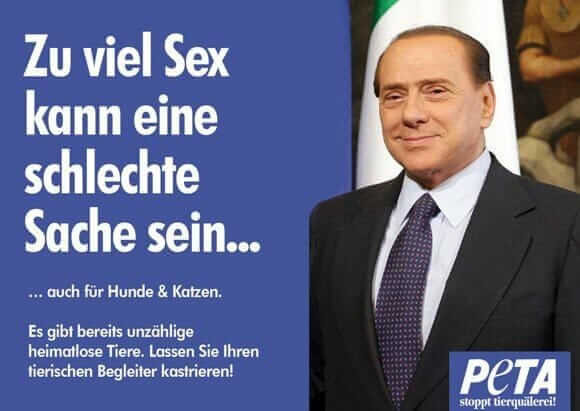 He certainly didn't approve the poster. But maybe it is not so wrong for Mr. Berlusconi: it is about his sexual performance.

And, Peta says, it should be harmful. The only question is for whom: for the image of the boot state. Certainly not for Berlusconi himself.