Disclosure & Image Rights: Destination British Columbia has helped us with our trip to Canada by taking over the travel costs.

There are several fashion weeks worldwide, but the eco fashion week in Vancouver is unique with its focus on ecological fashion. The initiator Myriam Laroche inspires with honesty and Sense - and the idea of ​​making the (fashion) world a little bit better step by step. 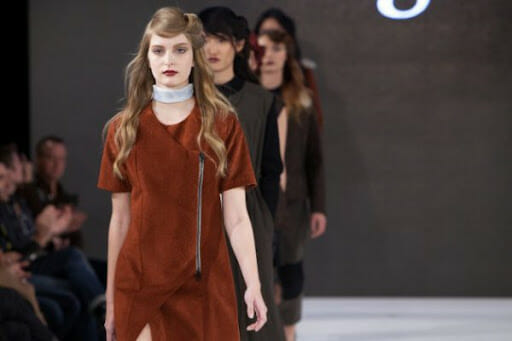 From the buyer to the eco-enthusiast

Myriam Laroche, founder of the Eco Fashionweek, is actually from Quebec. Already with 16 she produced first fashion shows. In addition, she holds degrees in fashion and PR, and has been a buyer of various models for two and a half years.

And one of the hard kind, as she says herself: “Like many others, my only concern was to keep the costs as low as possible. At the time, it wasn't clear to me what the production conditions were like, and I didn't care. ”

“Do something fundamentally different”

But over time, the buyer realized that things couldn't go on like this: “I had the impression that something had to be done fundamentally differently,” she explains her motivation. In fact, the fashion industry is one of the world's largest polluters.

When she heard that urban politics in Vancouver, western Canada, wanted to emphasize the ecological aspects of urban development and become the greenest city in the world, she got the idea: in 2009 she initiated the eco-fashion week, which has taken place twice a year since then. A good 15 designers were there recently, but most of them from Canada “sometimes also from abroad - for example from Hungary,” says the initiator.

"Our goal is to raise awareness of ecological fashion," she says. She is aware that the topic is very complex - especially with regard to the frequently occurring label fraud in the organic sector:

“We cannot control the conditions under which all the garments that are shown at the Fashion Week are made, but we have to rely on what the manufacturers tell us. And I keep asking myself where the limit is, ”says Laroche. Even though there are already initial approaches for certifications such as Ökotex or Bluesign in the fashion industry, you are surprisingly looking in vain for official participation.

For the initiator, it is much more a joint development process by organizers and labels: “We all still have to learn, step by step. Because many mistakes happen out of ignorance, because, for example, buyers do not know the connections, ”Laroche is convinced from his personal experience.

“Every label has to find its own towards more ecological fashion. That is why we offer seminars for employees in the textile industry to raise ecological awareness and improve knowledge of the production chain. ” Laroche wants to inspire. And maybe in the end there will be the creation of common standards. "It is important to share the knowledge, to discuss it and to join forces," she says.

Second-hand instead of throwing away

Laroches favorite theme, however, is the recycling of used clothing pieces. Every year in North America, every person picks 86 pounds away from clothing - that's almost a whole collection. Accordingly, there are contests at the Eco-Fashionweek, where designers from second-hand pieces 10-15 design new looks.

"If we succeed in reducing the fashion waste mountain, we will be a big step ahead," says Laroche and advises women: "You don't just have to buy second-hand fashion. But if one of 10 new items of clothing is needed, we are already a big step ahead ”.

The enthusiasm for second-hand fashion is no coincidence: Laroche herself is an enthusiastic second-hand wearer: "However, I started long before fashion week because I wanted to dress more individually," she reports.

I was very enthusiastic about Laroche's enthusiasm for the subject. It is nice that she devotes herself to the difficult topic with a great deal of pragmatism for what is feasible without exaggerated idealism. However, the Ökofashionweek is not a business model in its fourth year either: The event costs approximately 70.000 Canadian dollars each time, some of which come from sponsors, some of which are pre-extended by the initiator. In addition, she is still working in the catering industry to make a living.