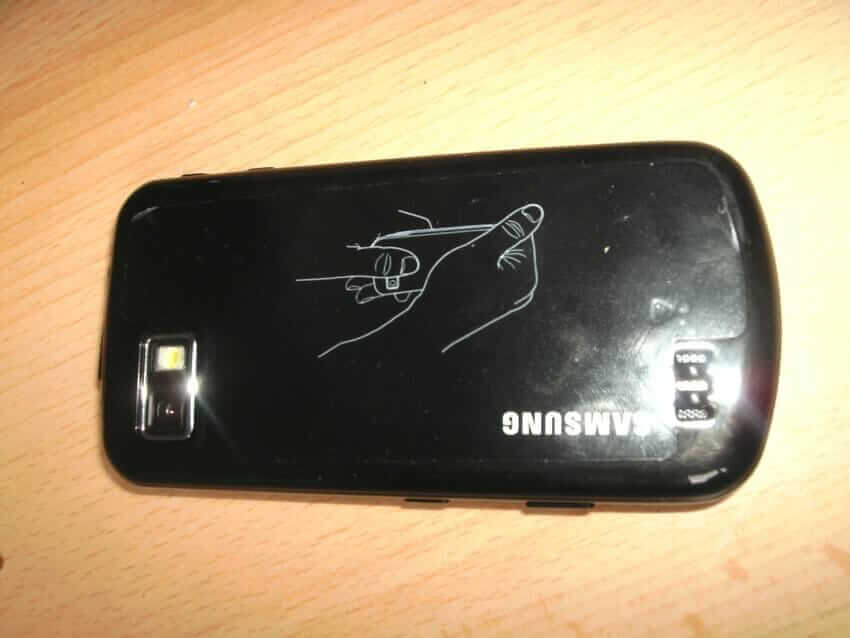 Content - More knowledge, PDFs books and personal advice here Hide
Why a double test?
Android 1.6 on the Galaxy
Android 1.5 on the Galaxy
Well built with small defects
Easy to use, good image quality!
Security - a little too much of a good thing
The trouble with the Akkudeckel
Stable and fall-proof
Summary

Why a double test?

Reason for the double test: After a failed attempt with the o2 update I had not come up with anything better than asking for a new Samsung Galaxy. Ms. Hauptkorn of o2 marketing also ordered that by return mail. And because there was nothing left to do on the old device, I simply flashed it again with Android 1.6.

With success. But since the battery cover on the Galaxy after the action with the knife no longer properly closed (even a Ersatzakkudeckel did not help!), I left it without further ado when the new order. And therefore enjoyed the benefit of testing both operating systems at the same time.

Android 1.6 on the Galaxy

The interface is identical, the App-Market looks a bit more chic and there is a speech recognition, which I have however just not yet understood. Apparently, there are still a few features that are explained below in the video, but there is, as the Google search on the start screen, synonymous under Android 1.5.

Otherwise, I am not clear what should be the newer Android version really better. On the contrary, there is a really big drawback: the programs crash constantly and must be restarted. This could be due to the fact that I have only an unofficial version of Android 1.6, because there is unfortunately no official version.

Android 1.5 on the Galaxy

Android 1.5 is completely different: Apart from occasional crashes, there is no functional impairment here. Otherwise I can not find any disadvantages. Well, there is no speech recognition. However, I just heard yesterday that even on the latest cell phones it only works in English ... so speech recognition under Android 1.6 cannot really be the best.

The update of o2 really improves the battery life compared to Android 1.6. Also the Switcher is extremely practical, because I can quasi with a thumb pressure the electricity-eating Internet connections.

Only the argument with the apps could convince me: Possibly, the shortly newer programs no longer work on the Galaxy, because they are simply to new for the old operating system. However, I had not so far this problem. And honestly, if my device works as I imagine it - why should I then always want to try the very latest apps? And why should I be willing to install a worse operating system that constantly crashes.

The design of the Samsung Galaxy appealed to me right from the start: the most necessary buttons are on the side and under the display. It also appears to be stable, as several falls show. If only the battery cover weren't ...

Super-chic, the Galaxy is not - but the more practical. Under the display, the speed dial buttons to call, answer calls, turn off and OK - and of course for the user menu. The latter, I first desperately searched for various programs and it took a long time until the penny fell (of course, I never read the operating instructions in principle).

I was used to Windows Mobile that the menu button is integrated somewhere on the screen. It is somehow much more practical - but of course somehow unusual and even after more than two months I sometimes have to remember that there is still a menu for the program. And I can't really tell the call and menu buttons apart ...

Easy to use, good image quality!

What I like: On the side of the practical button for the camera. Under Android 1.6 you could also record videos here, the integrated function is missing on Android 1.5 unfortunately. For this I have integrated a zoom function with the App Camera Zoom. Even otherwise, the integrated 5 Mega Pixel Camera works to my utmost satisfaction:

On the Amalfi coast I have made excellent pictures from the moving bus; anyone who has ever been there knows that this is not so easy with the bends, the traffic and through you disc. But the handling of this was, just because of the usabilety with only one hand and especially the shutter speed much better than my normal camera, which is no longer quite the latest model.

Security - a little too much of a good thing

Above the camera head is the button for locking / unlocking the display, which for my taste unfortunately has a much too long reaction time: You have to press half a minute until the display is unlocked. I have now set that the display is only blocked after two minutes - everything else makes the cell phone almost unused.

By the way, you have to re-enter the pin each time the device is switched on. At first glance, this may be practical as theft protection, so I have deactivated the function so far. At second glance, it only lasts as long Sensehow I lost my cell phone when it was switched off. If the cell phone is on, any thief can immediately enter the pin number. change according to his taste and that's it.

The trouble with the Akkudeckel

But what annoys me a lot more: The Akkudeckel simply will not sit. I have so far two mobile phones with three Akkudeckeln tried (which was also a reason for the exchange) - nothing helps. The fact is: On my mobile phone the lid sits perfectly - if the battery is not inserted. This is, of course, also obvious for obvious reasons.

Once the battery is inserted, there is no crater on the left side over the entire length of the cell phone, but there is a gap ... This is great, dust, dirt and sand can be found (if you do sit on the beach) penetrate well into the cell phone. And not only that: I already dropped the part because the battery cover came off when I wanted to take a picture. I just think of sticking a strip of Thesa film over it. Is it just me who has this strange problem?

After all, there are really positive things to report: the Galaxy seems to be stable. Unfortunately, I have already several times fallen down, last in full ride on the bike from the pants pocket slipped, while the Akkudeckel and the battery jumped. Blesuren seems the device but none to have carried, it functions as before, yes has not even scratches. And the problem with the battery cover - that already existed already!

The combination Samsung Galaxy + Android 1.5 + o2 update works better than Android 1.6. I can not say it often enough: Since o2 has created a really useful update for its customers.