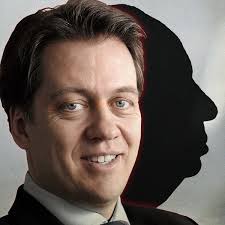 Michael Moesslang is a lecturer at the St. Gallen Business School, BAW and University of Munich, Top 100 Excellence Trainer, Coach and Author. Michael Moesslang has written numerous books, including “Professional authenticity: Why a jewel shines and pebbles are gray” and “So would present Hitchcock: Convince with the master of tension ”. Moesslang is an expert in the “PreSensation®” presentation method. His conviction: Everyone can become a positive ambassador for themselves or their company through personal impact and self-confident demeanor. More information at www.michael-moesslang.de

Rhetoric analysis Guttenberg vs. Westerwelle: Why Guttenberg is still popular

The focus of this week is a survey which Karl-Theodor zu Guttenberg still attributes to a high popularity. Through (almost) all parties! How come? An analysis.

Why do not we like people and others? In the immediate environment this can be explained by many things.

Above all, the unrecognizable sexual perfume plays a role, touch, appreciation, respected and perceived and much more. But with a politician that many never personally face (and in the nose)?

58% want Guttenberg back in politics

Karl-Theodor zu Guttenberg has made mistakes. Mistakes, which could partly have legal consequences, and perhaps also political errors, which at least some see so. Nevertheless, now this survey result ofTNS Emnid, published in Focus:

58 percent want KT back in politics after a break. That's more than CDU and even CSU votes. The results by party are astonishing: 82 percent of the Union is understandable. In the “CSU opponent” FDP it is even 92 percent, 10 percent more! And even with the SPD and the left, the majority of 55 and 52 percent.

Even with the Greens it is still still 40 percent. The results were even better immediately after the resignation, even the Green Voters were at incredible 78 percent. The question is why. The answer is simple.

What does the ordinary voter get from a politician? Photos, short film recordings in news programs, occasionally a talk show appearance. And of course the opinions of journalists and "normal" people.

It depends on the perception of the pictures

The most important thing in my opinion is the perception of pictures, films or photos. And Guttenberg scores like no other. His attitude is perfect, his voice pleasant, he speaks eloquently and without errors, smiles, is always sovereign and humorous, perfectly dressed ... In short: there is nothing that he does wrong (except maybe that in certain situations his left hand goes into his pocket).

Here's an older video on the Kunduz Affair: It's a tough fight, and yet the Secretary of Defense retains the form, remains polite but determined, and pleasing in his body language.

Guttenberg vs. Westerwelle: A comparison!

For the comparison Guido Westerwelle, who had just stepped down from some offices. Almost everyone follows him. It seems as if all the journalists, as well as the large part of the population, had conspired against him and found in him almost the enemy of the nation. He's doing almost anything wrong.

Not politically, every politician has advocates and opponents of his content (the fewest, however, exactly deal with these contents). No, it is his body language and speech: he roars, makes his face a rude grimace, strikes one with his hand almost on the heads of the spectators, makes negative gestures and often shows us the evil master teacher.

Even when he smiles, this sometimes seems malicious rather than friendly, because his mouth remains closed and wide, the corners of his mouth do not go up. The result is that it is unsympathetic.

Emphasis on works, because anyone who knows media people privately knows that often the media image and reality gap. Since I have met Westerwelle only once briefly, but I have not spoken, I do not want to judge whether it is or not.

Here is the moment when Westerwelle is asked in English. The British reporter speaks German by the way, he was just stubborn or wanted to ask the question in English for his recording.

Even in passages where he says positive things, talks about himself and his term, or wishes the successor all the best, the Foreign Minister uses a quite aggressive body language and voice.

So the one, KT, seems sympathetic, the other, Guido, has an unsympathetic effect - and they all take part. The media (even serious news!), The Stammtische, the people all over Germany, whether from the own or the opposing party.

The consequences have then turned out accordingly: The unfriendly is made a huge number out of it when he (politically correct) and politely ask a British journalist to ask his question in German, he is pushed out of offices and finally dismantled by his own party.

Large or even minor errors, from all will be a reason to get rid of him. On the other hand, mistakes are made to the sympathetic, which are clearly contrary to the law. His medial dealing with the affair around his doctortitel was Obendrein anything but professional, etc. Nevertheless many want him again and show so that they forgive him and keep the fidelity.

I think, by the way, that both politicians have done a lot of good and have also made some mistakes. However, I am disturbed by the fact that this is measured with two dimensions. Although: it shows once again how important it is to work properly. Not the content count, it is man and its effect: rhetoric from word choice over body language to voice and clothing.

5 responses to “Rhetoric analysis Guttenberg vs. Westerwelle: Why Guttenberg is still popular”