Gerhard Kenk is the editor of Crosswater Systems and is considered the grandfather of the job blogging scene. Former IT recruiter Gerhard Kenk has been running the Crosswater Systems portal since February 2000, making him Germany's longest-serving job blogger. The information portal is aimed at HR professionals and recruiters, job seekers and job exchange operators and provides an overview of the market for job exchanges and job search engines in Germany. More information at www.crosswater-systems.com

{Study} Recruiting: The job search and candidate experience of the future are mobile

In the next evolutionary step of mobile recruiting, the focus is no longer on the self-reliance of the employers but on the effect of a job advertisement on the recipient (applicant) of career advocacy. What is the optimal Candidate Experience of tomorrow? 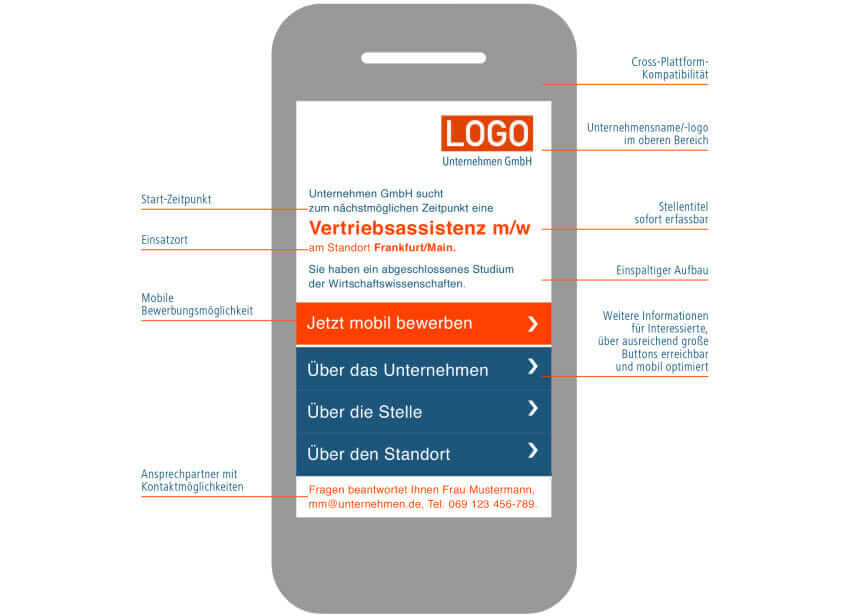 The fact is: The use of the Internet is increasingly shifting to mobile devices such as tablet PCs and smartphones. More and more professionals are looking for jobs this way. The IT market research company Gartner predicted that mobile devices, including PCs, will even replace them.

Thanks to numerous laboratory examinations such as eye tracking, surveys on mobile recruiting as by Prof. Wolfgang Jäger or surveys of the usage habits of SmartPhones, it is obvious that there is considerable need for action.

According to a study by Google, 29 percent of Germans already have a smartphone, and more than half of smartphone owners use it to access the Internet almost every day. And 14 percent are looking specifically for new jobs on the move - and the trend is rising.

Companies are not prepared

What companies can do better

As an innovation for the future, the study proposes to implement a better design of the job advertisements. Keywords such as wiping optics, tag cloud, organigram and search field are the focus of the discussion.

There are also studies on the candidate experience from the job exchange Jobware. With the “eye tracking system” she examined the applicant's reading habits.

How should job advertisements be made mobile?

The aim of this laboratory test is to take the newly acquired findings into account when designing job advertisements.

The subjects, who were observed under laboratory conditions when reading mobile job advertisements, did not take a sheet to their mouths.

Judgment of the target groups on the implementation of job advertisements for mobile recruiting then fell quite destructive. The most frequent criticisms were:

The recruiter industry can no longer deal with the 1: 1 updating of old and loved practices, but must also pay tribute to the technological progress in the applicant's speech.

The technology bridge of Indeed MoBolt cleans the mobile position display with a minimalistic information approach.

It also shows how online applications from the candidate's SmartPhone can be transferred directly into the employer's job management system by means of an interface technology without media discontinuity.

What is really important

Focusing on the really relevant content of a mobile job display is placed in the foreground.

Throw the building block system over

Remarkable in the case of the jobware solution approach is the absence of the 1: 1 update of a job display on reduced display conditions - as it is operated by many media designers.

In doing so, the important thing is differentiated from the secondary. At the end is a newly constructed job posting: The primacy of relevance.

Successfully optimized job advertisements are not just about adapting the optical elements to new, more stringent display conditions on the SmartPhone. Conceptual and structural changes are necessary - everything is subject to the primacy of the content, functional and technical relevance.

The most important changes in the overview

Eye-tracking lab tests with desktop-filled job ads are like a childbirth day compared to a scene party at the Techno-Club Berghain.

The cult-party-palace lives from a strict quality control, in this case from bouncers, which strictly adheres to the Berghain-Party-gene in the admission control of guests.

Against the golden beetroot

Perhaps the recruiting world could also profit from such controls and only publish mobile optimized job advertisements on the web that successfully passed such bouncer checks.

That remains a wishful thinking - at least as long as the “Golden Runkelbeet” initiated by Jannis Tsalikis and Henner Knabenreich has not yet penetrated the recruiter's collective memory.

6 responses to "{Study} Recruiting: The job search and candidate experience of the future are mobile"