Disclosure & Image Rights: We are media partner of the consulting company Universum, which provided us with the image material.

{Study} University ranking of the top universities in Germany: Studying with a job guarantee?

Yesterday, a new university ranking published by our cooperation partner Universum, access KellyOCG and Wirtschaftswoche. For them, the top 10 universities were also immediately the job guarantors for their graduates. But can one say that - and is that even desirable? 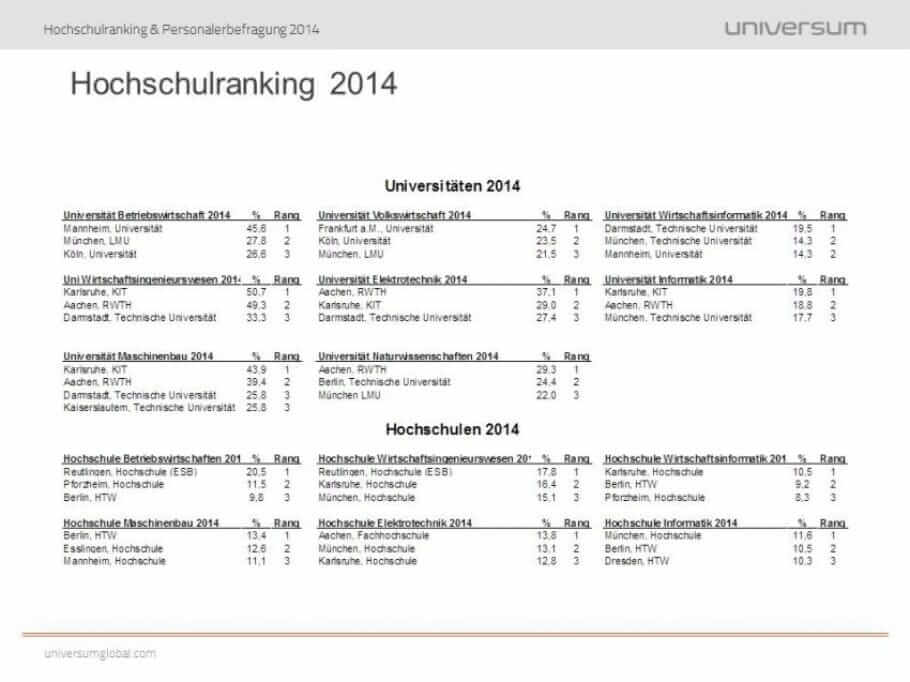 Students can be happy if you put them in front of their noses where you should study best. And yet such a ranking, especially garnished with the promise of “job guarantee” is also dangerous - and also for Company , It suggests: Simply study according to Scheme F at the University of XY - and then you will find a job.

Only recently, in a lecture by Marcus K. Reif, HR at Ernst and Young, I learned that companies should urgently think about diversity: What is important for companies is not penguins, who are constantly recruiting new penguins, but rather odd people.

But they often came to their destination by detours and had to deal with their own failure again and again. As an example, you only have to look at the career of the manager Thomas Sattelberger, who made it from the communist to the board of Telekom, where he introduced the women's quota and repeatedly argues against MBA and elite training.

Only studied subjects close to the economy

You can also argue about the mehtodic of the ranking. Studis Online has done that and scolds:

Of course, only subjects that seem to be of interest to companies are of course consistent - because, unfortunately, in Germany, too much attention is still being paid to the field of study in comparison to other countries. 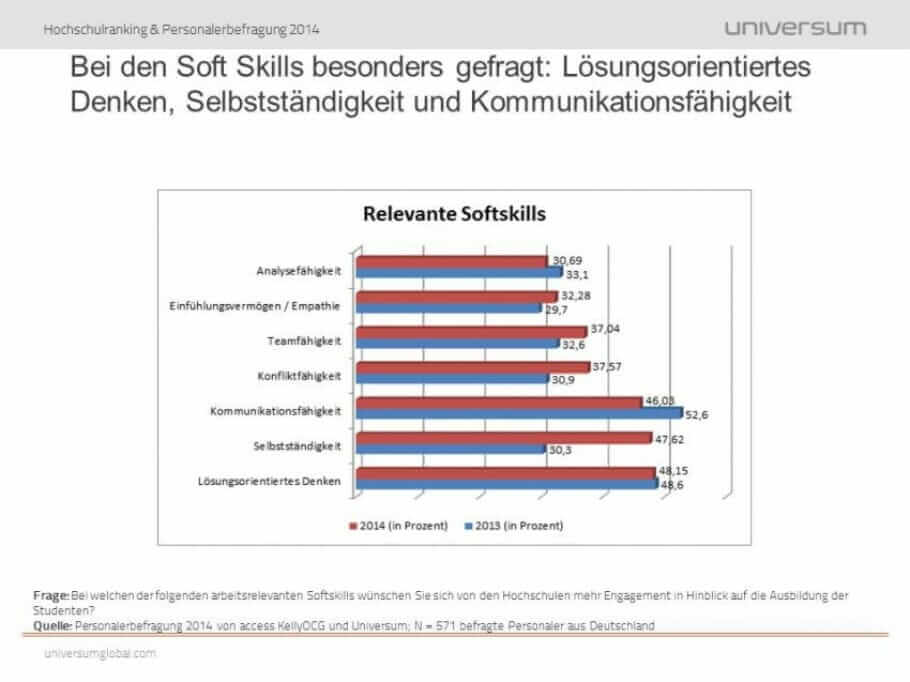 How subjective is the rating?

But I am a little different: For the university ranking Universum and access KellyOCG since 2007 annually surveyed only 500 personnel responsible for Germany. This selection I find a little unrepresentative. And also subjective.

The results reflect the staff 's perception that the universities and universities of applied sciences are best suited to the needs of companies, which criteria are important for the selection of applicants, and in which soft skills the staff of the higher education institutions have more commitment to the education of the students.

He maintains good relationships with the respective ones Professors. Or worse, he knows such rankings and has joined, often unconsciously, the general opinion of the College XY. Such things play a role much more often than is dear to many and thereby become a self-fulfilling prophecy.

But what are the top universities with an alleged job guarantee? Previously, the Karlsruhe Institute of Technology (KIT), which has won the top spot in three disciplines. The technical university, which is focussed on engineering and natural sciences, is ranked first in the fields of economic engineering, mechanical engineering and computer science in the assessment of more than 500 employees in Germany.

RWTH Aachen occupies the top position in the fields of electrical engineering and the natural sciences. At the Fachhochschulen, the staff responsible for personnel chose the Reutlingen University of Applied Sciences in the fields of business administration (business administration) and business engineering. The Berlin-based universities and technical colleges made a great leap forward.

The TU Berlin has improved in all areas and is among the top ten in five specialist areas in this year's ranking. The Humboldt University of Berlin and the Freie Universität Berlin were also able to jump into the top ten in three or two disciplines. At the Fachhochschulen, the HTW Berlin in the mechanical engineering sector climbed for the first time, an improvement by eight positions compared to the previous year.

4 responses to "{study} university ranking of the top universities in Germany: Studying with a job guarantee?"