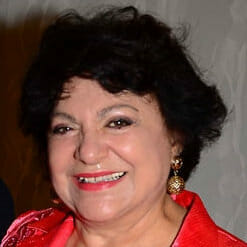 In the interview speaks Dr. Theophana Princess of Saxony-Katte on the challenge of buying oil as a woman in Iraq, emancipating and revealing her personal recipe for success.

Dr. Theophana Princess of Saxony-Katte and Duchess of Saxony was born 1949 in Sofia. Her father Peter Aladjov was Minister of Finance and Economics in Bulgaria during the Second World War, later he bought a successful trading company in Germany. Theophana was first married to Hermann Prince of Saxony and has four children with him. After his death she married the civil engineer Hans Hermann Katte.

Woman Dr. Princess of Saxony, what did you study? What is that? Dr.-Title?

Oh, I've studied everything: economics, law and art history. I also think so Dr.-Phil made. But just because it was quickest: My dad needed me back then in ours Company , Actually, I have always worked in business.

What did your company do exactly?

At that time, we sold German technology and industrial products abroad and bought raw materials there

What was your biggest challenge?

There were many challenges: I have always deliberately surrendered myself with my tasks, because I can only do the impossible.

But my most difficult task probably was to buy crude oil in the Iraq tanker as a young woman in the beginning of the 70 years?

Why what is so complicated?

Because I had to deal with people who regarded it as an offense to talk to a woman at all, let alone do business. At that time women could not even go to the restaurant alone.

And when I was invited to business partners, I often had to sit for half an hour because I thought I was only the secretary.

How did you manage to successfully complete the business?

With tricks: I have always said that I act on behalf of my father, eg even if I had to make important signatures.

And even though I wanted some warm food, I said my father is coming - and then I ate it myself.

And that was accepted?

Well, they also wanted to close the deal and had no choice but to accept me as a business partner.

Secretly I have always laughed about this game broken and also my business partners had soon understood that I was actually the boss. But I always had to build this bridge for them, they needed the facade of a man behind it. Anything else would have been a face loss.

Did you find it generally difficult to be a woman?

In Western Europe, I have not felt such problems so much, where I have generally enjoyed success and respect.

And communist China, too, was very emancipated. However, the market was quite unpredictable for us because of the size of the country.

How do you get respect?

I think it is very strong and as someone who has many doors.

What would you advise ambitious women to be successful: show yourself to be strong enough, or rather to exercise restraint?

It depends: If someone is too "pushy", whether male or female, I always think that there is a lack of substance. If you can do something, you don't have to let it hang out.

However, if men block the way for women because they have problems with their own ego and can not recognize the equality of women, then woman should show them where the lipstick hangs.

How does it work best?

With courage and skill. Quality is the most important success factor and then there will be enough co-workers.

However, men often do not trust enough courage to protect them. However, a woman needs support, especially in pregnancy - and a man is also needed.

What do you think of as a mother of four children of state measures such as parental benefit or childcare allowance?

I find it nice that men participate in child rearing and even change diapers. With the father of my children it was different: when he came in, the baby girl had to leave the room with the baby.

However, the dispute about the childcare allowance is silly, I do not understand it: Everyone should do as he pleases: Who prefers to educate his children at home, should do that and can be happy if he still gets money. And everyone else can go to work and organize childcare.

You are patron of the Society of friends of the German Heart Center - what gives you the honorary activity?

I have been active there since the beginning of 90er. Being able to help other people gives me a great inner satisfaction and happiness. It makes me feel very rich. It is a misfortune, however, not to be able to give.