Disclosure & Image Rights: Huawei supported us with free devices, which we checked to the point of being unusable as part of the test.

With Android phones as a working device, I have much better experience than with Windows 8 tablets. What could be more obvious than that my next test device combines the advantages of both devices: So it should be a so-called phablet - and readers can win it. Like, is at the end of the post. 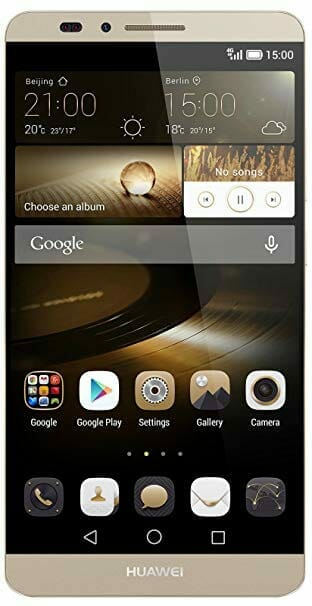 Just to operate the phone with one hand, for example to take pictures or even make calls, as you are used to from "normal" smartphones, the phablet is actually a bit unwieldy and you have to be careful that it does not fall out of your hand. This can be remedied by a suitable bag that offers more grip.

The slots for Simcard and SD card are difficult to open with the supplied "key". The corresponding constructions look extremely fragile, sometimes it is difficult to exchange cards on the go.

The Ascend Mate7 already has an internal memory of 2 GB RAM and 16 GB ROM and can easily be extended to 16 or even 32 GB. You can also install some programs on the memory card.

Ideal for traveling is the extremely light charging cable. Only the plug is a bit large and clunky advised.

The recharge time is initially gigantic, in fact one should come with the large 4.100 mAh battery the whole day over the rounds. The indicated 648 hours standby and 30 conversational hours are however illusory.

Especially if you take a lot of pictures, put the screen on extremely bright and surf a lot on the Internet - then you need not be surprised if the battery already weakens in the afternoon. In my view, there is a major shortcoming: The battery is firmly glued and can not be replaced. At some point, the device will only run with an external battery.

The Phablet as a working tool

One thing you have to leave the Huawei Ascend Mate7 with Android 4.4 however: It is the best working tool I had so far. I can conveniently e-mail, write texts and even view and edit photos.

For texts I use free office app WPS, which has the most necessary functions of an Office program. Only the connection with the Bluetooth keyboard could be a bit smoother, in fact that's quite a hustle and bustle. And even the editing of longer texts is still difficult on this phone and especially the copy and paste menu is not very user-friendly with touchpad on Android, but this is not a specific problem of Huawai.

There is only one virtual trigger for videos and photos. The main camera has a maximum resolution of 4160 x 3120 pixels or 12,98 megapixels, camera on the front makes photos with 5 megapixels and videos in Full HD. On the back sits a white LED.

A little annoying for me is that the device emits an apparently on Huawei branded sound when booting - this is especially a problem if you want to turn on the device during an event and so inconveniently noticeable. Turning off the system sound does not help here. The only solution is to turn off the sound of the device completely before turning it off. If you forget, as I do, to turn it up again, this will make the whole functioning of the phone ad absurdum.

In general, the boot is a bit slow - before you can enter the password, you land on the home screen, which is awkward. The fingerprint sensor on the back, which allows you to unlock your phone simply by finger, could help here - he would be coupled only with the Simcard. The ingenious invention works but unfortunately only to unlock the screen. Since I do not feel like unlocking simcard and screen every time I drive up, I have to deactivate it.

Also difficult is the UMTS reception: Occasionally, this beats in between, what can then be remedied only by a reboot. And with different providers, no error of the network operator so. The WIFI reception is sometimes delayed. These connectivities could be improved.

Conclusion: Despite some weaknesses, the Huawei Ascend Mate7 is a practical work tool for me - this is mainly due to the convenient large screen. With a price below 500 Euro, it is also cheaper than comparable competitors.

We have a winner. The winner was notified. I thank all the others for their participation!