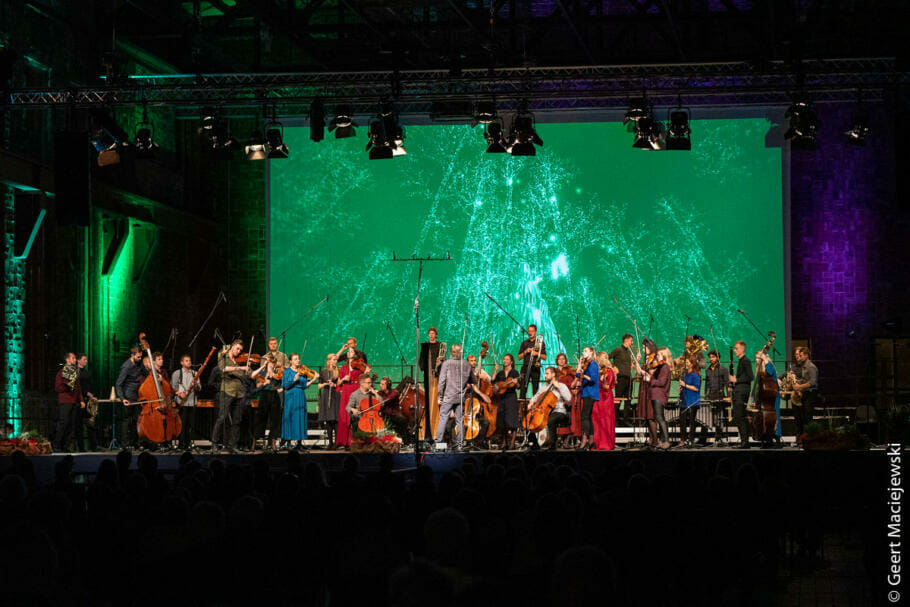 Special concert at the historic location

The Usedom Music Festival has made a name for itself as one of the world's largest themed festivals with a musically exclusive program from the respective host country, many international artists such as Kurt Masur, Mstislaw Rostropowitsch, Ute Lemper, Teodor Currentzis or the NDR Elbphilharmonie Orchester have already performed here. State guests were also there again and again: Mikhail Gorbachev, Angela Merkel, Queen Silvia of Sweden and many more.

The special concert 12 Years of German Unity took place in the historic power plant in Peenemünde on September 30th - at the same time a festive outlook on the 27th season of the Usedom Music Festival, which will be hosted by Norway in 2020. Also among the audience: the incumbent Prime Minister of Mecklenburg-Western Pomerania, Manuela Schwesig, and former Federal Chancellor Gerhard Schröder.

Concert is, however, a somewhat too modest term for the unusual staging: The event was a homage to the entire Baltic Sea region with works by composers from Denmark, Sweden, Norway, Finland, Russia, the Baltic States, Poland and Germany. The creative music composition was fantastic:

Beethoven in the Nordic Pulse

Beethoven was of particular importance in his anniversary year: the movements of his works were placed in a new context, mixed up, so that one could discover completely new facets of Beethoven's symphonies, especially his gripping, concise rhythm. The almost athletic interpretation of the first movement of Beethoven's well-known 5th symphony was particularly outstanding.

In addition, there was their own stage design with a projection coordinated with the “Nordic Pulse” program, conductor Kristjan Järvi and the young musicians were almost dancing to the music, so much was their enthusiasm for innovation and playing.

In general, the Baltic Sea Philharmonic, which was founded on Usedom and initiated by the Usedom Music Festival, is special in several respects: conductor Kristjan Järvi and the musicians, it seems, merge on stage, so to speak, into a single organism, an impression that is created as a result that the entire 70-minute program is performed completely by heart while standing.

The orchestra is also a successful symbol of the regained unity in the Baltic Sea region, which began with German reunification thirty years ago. The musicians come from all countries around the Baltic Sea. Soloists from the orchestra excelled in various pieces, for example the violinists Evgenia Pavlova and Ksenia Ivakina in “Aurora”, clarinetist Alexey Mikhaylenko and bassoonist Arseniy Shkaptsov in “To the Skies” by Gediminas Gelgotas or violinist Maximilian Procop in “Snow White” from “White” Dragon ”by Kristjan Järvi. The orchestra has conquered half the world with innovative concert ideas, programs played completely by heart and inspiring collaborations and has performed all over Europe as far as the United Arab Emirates. The orchestra will be performing in Hamburg and Berlin on March 14th and 15th, 2021.

The Usedom Music Festival takes place from 19.09. - 10.10.2020, the host country this year is Norway, which is part of the Baltic Sea region due to its cultural orientation. The festival comes up with a whole range of unusual venues and events:

Jan Bjøranger, for example, is one of the masters on the fiddle, the central instrument of Norwegian folklore, which the musician wants to bring closer to his listeners. There is a lecture on the Nordland travels of the last German emperor Wilhelm II. The Nordic String Quartet, which has united two women and two men from Denmark, Sweden and the Faroe Islands since it was founded in 2013, offers pieces by the Norwegian composer Carl Nielsen , Edvard Grieg and Nancy Dalberg close.

And of course, in the Beethoven year on the 250th birthday of the master, this one should not be missing either: Malte Boecker, director of the Bonn Beethoven House, and Albrecht Selge, author of the recently published novel “Beethovn” talk to Jan Brachmann, the Dramaturge of the Usedom Music Festival about how such a well-known figure can still touch us. In addition, music is played that shows us the composer from lesser-known sides as well: tender, humorous, dreamy.