If you do not expect much, can not be disappointed, one says. This was exactly my impression of the future lab of the taz, the 8. and 9. April in the House of World Cultures, Berlin. On the contrary, I found some unexpectedly good. 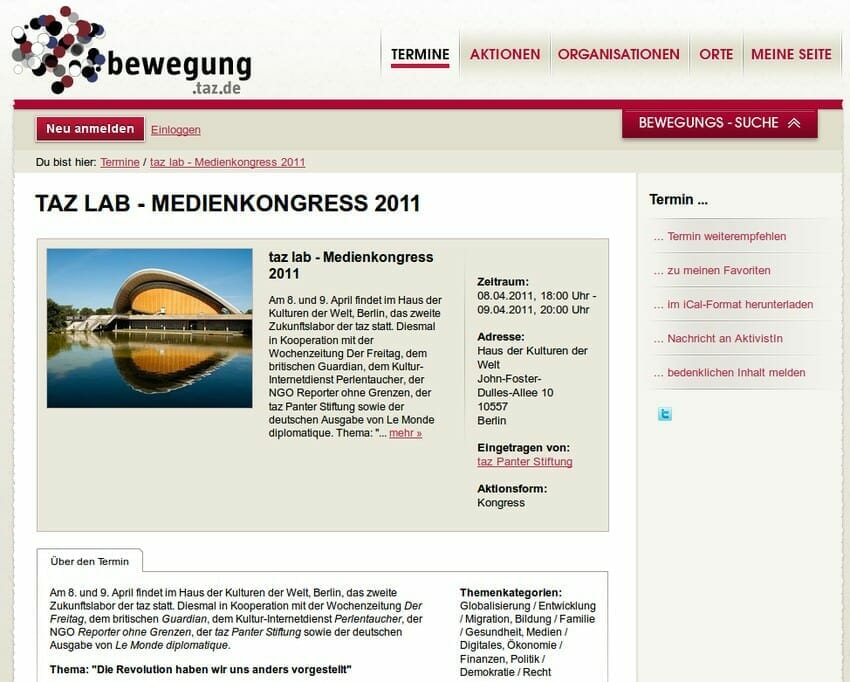 Job seeker - dangers from the net!

My highlights at tazlab were Hans Leyendecker and Rainer Langhans. I also tweeted that on Saturday and promptly there were objections from a user named @Chr1stoph - Leyendecker clearly, but Langhans, that was entertaining at best.

Well, I obviously have to go a little further: Leyendecker in the event “The big leak: WikiLeaks and the consequences: Which information should remain private, which should be made public?” was especially good because he was more wonderful than anyone else about the failures of his own guild, for example in the economic crisis.

And because he drew my attention in the course of my research to a danger that threatens job seekers in addition to the otherwise popular topos of the googling staff from the net:

Namely, journalists who are hoping to find potential whistelblowers on Facebook to find people who have left a particular company and who are complaining about their ex-boss.

Constanze Kurz and Daniel Domscheidt-Berg briefly held their breath for this new research method. And I will also learn a little more about this. Until then, all users are advised not to blaspheme on Facebook or anywhere else about their ex-boss. Otherwise you quickly get into the crosshairs ...

By the way, Andreas has a very detailed one Article written about this panel.

Closed due to overcrowding

The event Shitstorm-surfers, trolls and other annoyances: Do we need a new ethic for the net? was highly productive, whether on the podium and between moderator and audience. After all, she has once again confirmed one of my personal prejudices :-)

Unfortunately, I couldn't get into the event code4copyleft: Tools and Conventions for the Remix Society due to overcrowding. At this point I would prefer to remain silent about some organizational weaknesses and various personal mistakes. Just this much: The student staff at the Medienforum Mittweida were much more energetic than here.

In innovations: role model Axel Springer? Who invents the picture newspaper of the 2 century? I would have expected less praise for Mr. Springer and more potential innovation models - which confirms once again that most people dread fishing in the digital revolution.

In addition, I had wanted some sharper objections from Mercedes Bunz and Friedrich Küppersbusch. Instead Springer biographer Michael Jürgs was able to talk about Springer podium-filling. The whole seemed somehow like an old-fashioned wreath with lady.

Why I found Rainer Langhans awesome

Pay please! Do users voluntarily - or do they have to? did not offer much novelty: That Springer maintains the old Pay model and does not want to use Flattr is actually logical. So I then went after half the time to get into The new 68er. The digital generation - creative revolutionaries or adapted followers? a truly brilliant Rainer Langhans experience.

Brilliantly simply because he did not let himself be stretched in front of the carts: The panel - and not only this - reveals once again that there is a huge cultural difference between journalistic events on the Internet and IT events on the subject.

And I don't understand why you always have to discuss the same stuff on the former: namely that the internet is bad and whether we don't all have the feeling that “it somehow goes down” (original soundtracks from the audience) (By the way, the questioner meant that Facebook is pulling culture down ...).

And that's where Alt-68er Langhans did not join in: The Internet was a cultural achievement that made him very happy, he let the surprised listener know. Rainer Langhans - apparently one who has strapped it.

Prejudices are independent of age

What I also do not understand is what it always has to do with age: There are older, very internet-savvy people and early 20s who throw a lecture at my head “Every farmer can blog there”. Peter Kruse presented it differently at Republica 2010.