Text comes from the book: “Rich Dad's Investment Guide: Where and How the Rich Really Invest” (2015), Rich Dad Poor Dad: What the Rich Teach Their Children About Money ”(2016), Why the Rich Get Richer” (2018), More Important Than Money: Building the Perfect Team as a Founder or Entrepreneur ”(2018), Boosting Your Financial IQ: How to Be Smarter with Your Money” (2019), Rich Kid Smart Kid: The Perfect Start to Financial Freedom for Your Child ”(2019) & The Business of the 21st Century ”(2019), published by Münchener Verlagsgruppe (MVG), reprinted with the kind permission of the publisher. 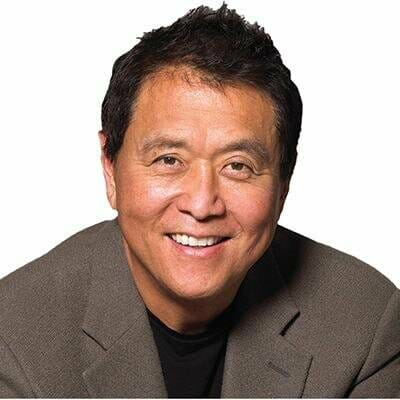 Robert T. Kiyosaki is the author of the international bestseller Rich Dad Poor Dad. 25 years ago he founded the Rich Dad Movement, which brings trading and investing expertise to thousands of people in numerous countries. He has written over 15 books and sold more than 26 million copies. Today he devotes himself to his favorite pastime, investing, and as a speaker passes on his knowledge to his fans at countless events.

Financial intelligence makes you richer than money and thrift

The rich get richer and the poor save themselves poor. But real wealth requires a high level of financial literacy. How can this be done?

Why money doesn't make you rich

The answer is no. Money alone does not make you rich. We all know people who go to work every day, work for money, make more money, but don't get richer. Ironically, many get deeper into debt with every dollar they make. We've all heard stories of lottery winners, people who became millionaires overnight and then fell into poverty again. We have also heard stories of properties that have been foreclosed. Instead of making homeowners richer and financially secure, property is driving them out of their homes and into the poor house.

Greed outpaced caution. Rumors said the price of gold would hit $ 2.500 an ounce. Greedy investors began to buy gold even though they had never done it before. But instead of selling some of my gold coins and making a small profit, I stuck to it and also hoped that the price of gold would continue to rise. About a year later, when gold fell below $ 500 an ounce, I finally sold my last coin. From 1980 onwards, I watched the price of gold go lower and lower until it bottomed out at $ 1999 in 250. Although I didn't make a lot of money from it, gold taught me many priceless lessons about money.

When I realized that I could lose money by investing in real money, namely gold, I realized that it was not gold, i.e. the asset, that was valuable. It was the information associated with the asset that ultimately made people rich or poor. In other words, it's not real estate, stocks, mutual funds, Company or money that makes people rich. It is information, a head start in knowledge, wisdom and know-how that can all be described as financial intelligence that make you wealthy.

A friend of mine is a golf fanatic. He spends thousands of dollars a year on the latest golf clubs and golf equipment to hit the market. The problem here is that he refuses to spend a dime on golf lessons. As a result, his golf game remains the same despite having the latest and greatest in golf equipment. If he invested his money in golf lessons and used last year's clubs, he might be a much better golfer. The same crazy phenomenon occurs in the money game. Billions of people invest their hard-earned money in assets like stocks and real estate, but almost nothing in information. Therefore, your account balance will remain roughly the same.

Not a magic formula

Most people don't get rich because the subconscious is the most powerful of the three parts of the brain. For example, people can learn about real estate and use the left and right hemispheres of their brains to know exactly what to do, but the powerful subconscious part of their brain can take control and say, “Oh, that's too risky. What if you lose your money What if you make a mistake? ”In this example, the feeling of fear causes the subconscious mind of the brain to work against the desires of the left and right brains. Simply put, in order to develop your financial talent, it is important that you first know how to get all three parts of your brain to work in harmony, not against each other.

Many people believe that they need money to make money. That is not true. Always remember that if it is possible to lose money by investing in gold, you can lose money anytime, anywhere. Ultimately, it's not gold, stocks, real estate, hard work, or money that makes you rich, but what you know about gold, stocks, real estate, hard work, and money. At the end of the day, it is your financial intelligence, your financial IQ, that makes you rich. Please read on and get richer by getting smarter financially.

Savers are losers because the rich don't work for money

It is always said: For the poor population and the middle class, "saving money" is a religion, financial rescue from poverty and protection from the cruel world. For many it is blasphemy to refer to savers as "losers". The lesson: a picture is worth a thousand words. Take a look at a table from the Dow Jones Industrial Index from 120 years ago and you will understand why and how savers became losers. The graph shows that there were three massive stock market crashes in the first ten years of the new millennium. The graphics on the next page show these crashes. The first crash was the dotcom crash around the year 2000. The second was the property crash in 2007 and in 2008 the bank crash followed immediately.

The real estate crash that wasn't

Rescuing the rich Between 2000 and 2016, banks continually cut interest rates and printed money to serve the economy. While the ruling elite wanted us to believe they were saving the world, the rich only saved themselves, but abandoned the poor and the middle class. Today interest rates are below zero in many countries. That is why savers are losers. The biggest losers today are the poor and the middle class. Those who work for money and save.

In 2007, when subprime borrowers were unable to service their subprime mortgages, the housing bubble burst worldwide and the lesson hit millions of homeowners with full force. Her house was not an "asset."

The real problem: Most don't know that the property crash actually wasn't. It wasn't the poor who caused the property crash. It was the rich. They invented financial constructs called financial derivatives. Warren Buffett calls them "financial weapons of mass destruction." Now, when these financial weapons of mass destruction exploded, the real estate market collapsed ... and it was blamed on the poor subprime borrowers. In 2007, financial derivatives were valued at $ 700 trillion. Today the total is estimated at $ 1,2 quadrillion. In other words, the real problem has not gotten better, it got worse.

That is why the rich are getting richer

In 2007, President Barack Obama ran for re-election against former Governor Mitt Romney. When it became known that President Obama paid around 30 percent of his income in taxes, while Governor Romney not even 13%, it robbed him of so much electoral support that it cost him the election. And taxes also played a central role in the 2016 American presidential election. But instead of figuring out how the rich can legally pay less taxes, the middle class gets angry. While the president promises to cut taxes on the poor and the middle class, the reality is that the rich generally pay less taxes. The reason for this lower taxation is due to the previously mentioned fact that the rich don't work for money. As long as someone works for money, he pays taxes.

Even when presidential candidate Hillary Clinton promised higher taxes for the rich, it was simply a matter of raising taxes for high-income people. It was about doctors, actors and lawyers - not the really rich. While I have tried to explain why the rich are getting richer and have kept this explanation as simple as possible, what the rich really do is not easy. Let alone is it easy to explain. What they actually do requires real financial education that is not taught in our schools.