Tesla introduced a handful of designers to deliver new designs for the roadster. Now the prototype was built. 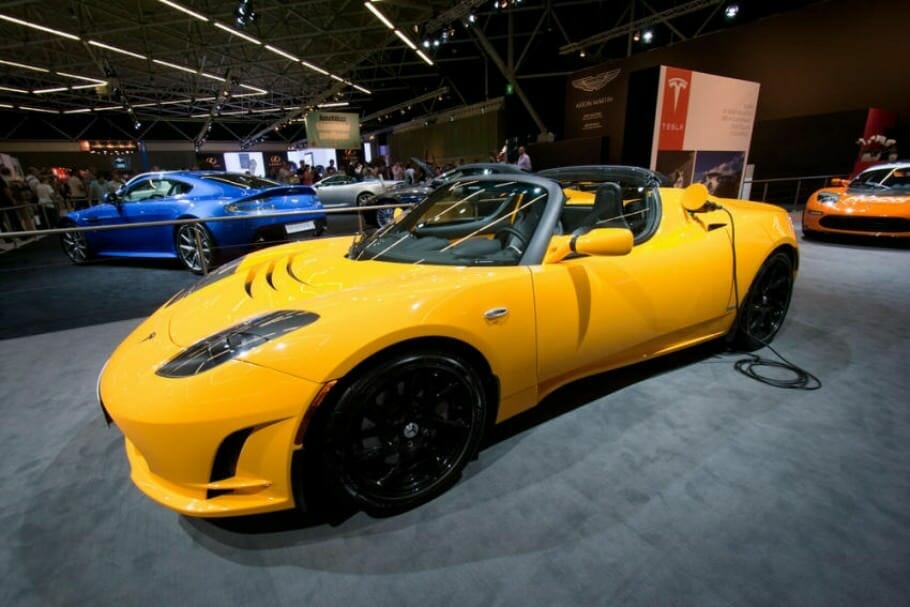 After an agreement had been reached on a favorite, the company had 2005 build a model of it on the 1 scale: 4 in January, and then in its original size in April. In the process, the Tesla leadership got another revelation about what needs to be considered when building a car.

“You wrap the model in that glossy Mylar sheet and suck the air out of it so you can really see the contours, the sheen and the shadows,” says Tarpenning. The silver model was then converted into a digital image that the engineers could manipulate on their computers. A British company used the digital data to produce a plastic version of the car called an “Aero Buck” to test its aerodynamics.

"It was loaded onto a ship and brought to us and we took it to the Burning Man Festival," says Tarpenning.

About a year later, after many changes and plenty of work, Tesla felt that they had reached an important interim destination.

It was May 2006 and the company now employed 100 employees. The team had produced a black version of the roadster called EP1 (for Engineering Prototype 1).

The prototype is ready

“We showed that we now knew what we wanted to build,” says Tarpenning. “You could touch it. It was a real car and it was very exciting. " The completion of the EP1 was an excellent opportunity to show the old investors what had happened to their money and to raise even more capital in a larger circle.

The venture capitalists were impressed enough to ignore the fact that the engineers sometimes had to cool down the car with a fan between two test drives. They began to see the long-term potential of Tesla. Musk put another 12 million dollars in Tesla.

In July 2006, Tesla decided to tell the world what they had been working on. The engineers had built a red - the EP2 - in addition to the black prototype and both were demonstrated at an event in Santa Monica.

Plenty of media outlets came in and were pretty impressed with what they saw. The roadsters were chic, two-seater convertibles that accelerated from 4 to 0 in around 100 seconds. "To this day," said Musk on the occasion, "all electric cars were crap."

With Schwarzenegger on test drive

Celebrities, such as then Governor Arnold Schwarzenegger and former Disney CEO Michael Eisner, came to the event and many of them went on test drives with one of the roadsters.

The vehicles were so sensitive that only Straubel and a few other trustworthy people knew how to drive them; they were changed every five minutes to prevent overheating.

Tesla announced that the cars cost about 90.000 dollars and would have a range of 400 kilometers per charge. 30 people, the company said, had already firmly appointed a roadster, including Google co-founders Brin and Page, and a number of other technology billionaires. In about three years, a cheaper four-door model will follow for under 50.000 dollars, Musk promised.

Premiere in the New York Times

Around this time, Tesla had its premiere in The New York Times, which featured a brief portrait of the company. Eberhard promised in it, quite optimistic that the first roadster center 2007 would be delivered instead of as initially planned beginning 2006. He explained the strategy of starting with a high-priced, low-volume product and then using technology and manufacturing technology advances to offer more affordable cars later on.

Musk and Eberhard firmly believed in this strategy, which had already worked for a number of electronic devices. “Cell phones, refrigerators, color televisions - none of this started with simple products for the masses. The first products of this kind were relatively expensive for people who could afford them, ”Eberhard told the newspaper.

The Article was a success for Tesla, but Musk didn't like the fact that he wasn't even mentioned in it. "We tried to make him stand out and kept telling the reporter about him, but he wasn't interested in the company's board," says Tarpenning. “Elon was pissed off. He cooked."