Creative advertising has to be expensive? Sometimes the opposite is the case. Sometimes really bad advertising is really good - Twitter has already successfully demonstrated it. 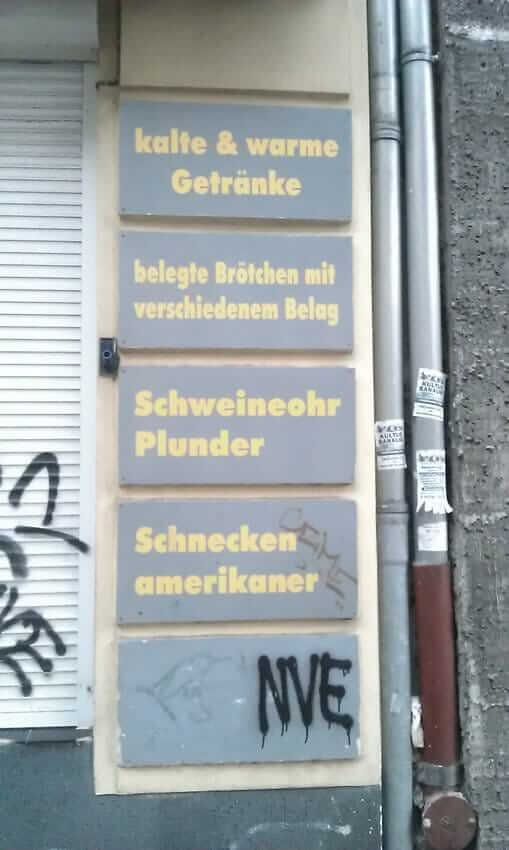 Content - More knowledge, PDFs books and personal advice here Hide
Write errors with funny associations
Whoever attracts attention wins!
High advertising effectiveness in the car parade
Tasteless advertising for lawyers
Digital on the advance
Funny and modern?
Who recognizes the joke?
Past the target group
Infringement of trademark law
Who makes advertising for whom?

This billboard in Berlin-Wedding, a district that is not particularly hip, caught my attention last week: Not because it was so elaborate and creative, at least not on purpose.

Not because the content is particularly creative. Rather, the spelling adapted to the width of the boards and also the spelling mistakes aroused some associations and made me grin spontaneously. What do I have to imagine under a pig ear junk? And what are snail Americans?

It is clear to me, of course, that these are baked goods, but they are so wonderfully wrongly combined that I went straight back to the shop to look at the things.

And that shows: In order to create funny pictures in the mind of the viewer, sometimes it just takes a few spelling mistakes. No expensive agencies that work on expensive campaigns with great effort and thinking spaces adapted to the lifestyle of the target group.

I also found this idea to bring your own product as close as possible to football fans, which was thought up by business people during the last football World Cup: the Autocorso.

Because who is here with his company car on which he is advertising for Company does, participates, has a large audience. If he takes part out of joy about the victory of his team, that's legally completely correct. But he still made advertising for himself. The only question is whether you really reach the right target group in this way or whether you simply risk defects in the car!

By the way: there is even an Oscar for truck advertising! The “Rhino I Rolling Advertising Award is the most important award for creative truck advertising in Germany, endowed with 185.000 euros. With the “Golden Rhino”, the most creative new truck motif for Germany's motorways is chosen annually - on the initiative of the promotional association of truck advertising (FdLW) and trans-marketing GmbH.

Unusual advertising is not always particularly original, sometimes it is really tasteless. As this example from communication consultant Timo Lommatzsch shows ...

Communication consultant Timo Lommatzsch) demonstrated via Twitter yesterday that lawyer advertising is also really tasteless: Below he posted this self-made photo with a child's drawing demonstrating an allegedly harmonious year from a child's point of view - lawyer included. It was the German Lawyers' Association that committed this bad taste. Well then happy new year! 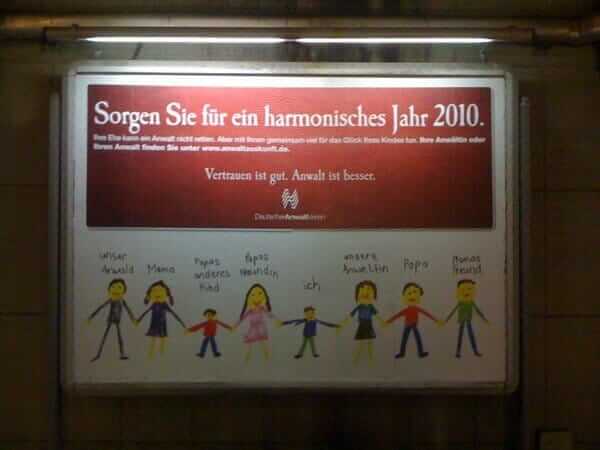 Digital on the advance

For excitement at the pirate party, however, this advertising by the tourism company L'TUR, which flirts with the election victory of the Pirate Party in Berlin. That was probably funny and up to date, but is wrong for several reasons.

Personally, I am pleased that the entry of 15 pirates into the Berlin parliament across Germany has such an echo. For example, tonight Christopher Lauer is a guest of Stefan Raab. This indicates that the internet is becoming increasingly important in our society.

But what the last-minute tour operator L'TUR has done goes a bit too far and also misses the target group: “Even better than 15 seats in parliament? 15 seats on the beach ”is in the top right corner. The orange logo of the Pirate Party is emblazoned over it, quite hidden in all the pink.

L'TUR probably wanted to be particularly funny and modern. But it is not - and for several reasons: On the one hand, nobody understands this joke if it is not related to politics / Berlin / Internet.

Who recognizes the joke?

Well, that the pirates have moved into the Berlin Parliament, even the Swabian housewife heard in Hintertupfingen. But that's exactly 15 - that's where I have my doubts. And that makes exactly the joke of this advertising.

At L'TUR, by the way, you don't seem to have been so sure about it yourself - would you have otherwise shamefully clapped the advertisement in the top right corner?

Past the target group

Apart from this, advertising simply goes past the target group: the Internet-active, young people I know are more enduringly thinking and ecologically interested. Whether they would book a last-minute holiday on Mallorca or in Dubai, I dare to doubt.

Finally, there is the question of copyright: Even without the use of the pirate logo, I would consider the saying tasteless to questionable. What does politics have to do with a package holiday? Nothing! Someone at L'TUR acted quickly without thinking any longer!

However, the use of the logo is a violation of trademark law. At least - and I assume from the discussions on Twitter - if the pirate party L'TUR has not allowed the logo to be used. And apparently the logo is registered as a brand.

Perhaps it was thought at L'TUR that a party that does not necessarily stand for the observance of trademarks and copyrights (at least in the general public) will not get upset about it or that their logo will not be registered as a trademark to let?

Who makes advertising for whom?

The pirates, however, are more relaxed about this and wonder who is advertising for whom. L'TUR, on the other hand, is happy about the great feedback. Well, other actions were discussed more violently!