There is a lot of discussion about the future of work. An important factor here: the right tools. And because you have to think as big as possible, then completely different work is possible - for example with holographic screens and mobile kitchens.

Dream tools of the future

I've been experimenting with various mobile tools for a long time. So far, I have not been really satisfied: my perfect solution, light and small enough for a handbag or travel backpack, but still practical enough to be able to do as many operations as possible. And I don't just mean that eMailen, surf the Internet and twitter, but also Article write, blog and maybe even edit graphics.

Our future tools are tools for on the go. However, today's options are far from ideal. Because my dream would be a smartphone with a reasonable external keyboard and a holographic screen like the one in the video above. Then you would no longer need to have any discussions about tablets or notebooks. Or does it already exist?

Light but not powerful

This is exactly where the problems begin: Because small and light usually means uncomfortable to use and not very efficient. After all, technology has recently taken a few steps forward, as I was able to ascertain when testing with different smartphones: I now almost only use my mobile phone on the go, simply because it is smaller and lighter.

I found the notebook use too complicated for a long time because of the operating system, the latest version of Windows has caught up significantly here. On a 10-inch screen, the operating system designed for large screens quickly became a problem: Apart from the fact that windows and menu bars on a smaller display quickly become confusing: typing texts may still work well. But at the latest when I want to switch back and forth between different applications, the touchpad on the small keyboard becomes too bulky. And anyway: at the latest to be able to quickly read a text on the Internet in between, such a netbook is far too unwieldy: what is missing is simply the touchscreen. 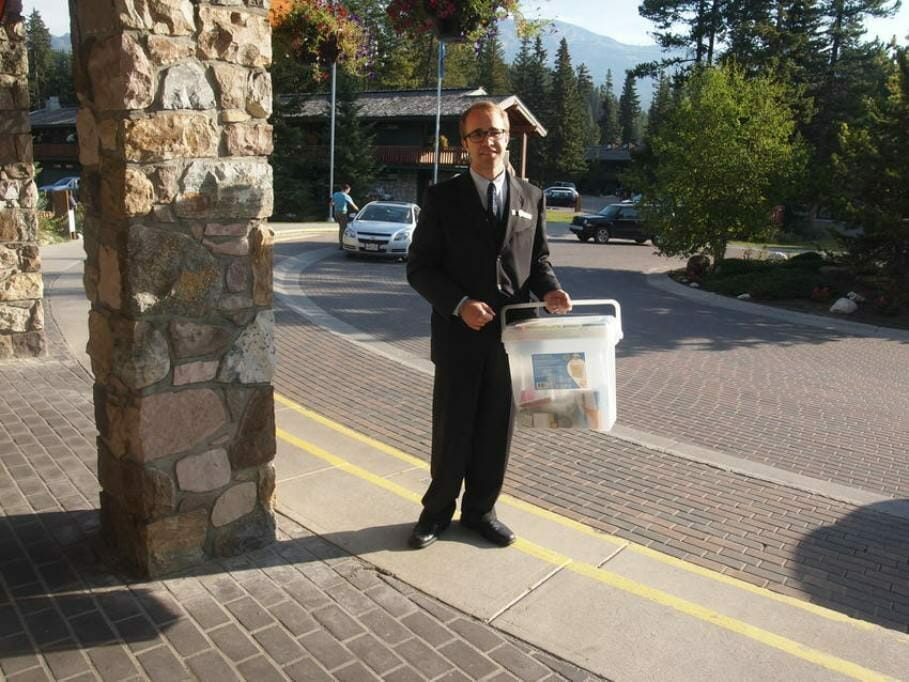 Smartphone: better than the Nebook?

Everything is much easier on the much smaller smartphone: the apps are optimized for the small mobile screens. Even blogging and editing comments is easier on the smartphone than on the netbook. And that means something. The computer of the future may work quite differently: With a touchpad and much more interactive than we can imagine today - Star Trek sends its regards. Or what Johnny Haeusler once wrote:

“I guess I can now be considered computer-conservative because I believe that we are experiencing the first real hardware and GUI change since the mainstreaming of the Internet. The fact that children use Apple's touch interface shows that the days of mice, windows and desks are numbered. ”

Meanwhile, the device manufacturers are wondering where the journey is headed: notebook or tablet? Tablets are smaller and lighter, so they are more suitable for on the go. However, they are not yet a full computer replacement. Photoshop on the iPad will probably remain a dream for now! So would you prefer a netbook or a notebook?

Some time ago I had the opportunity to Peter Hortensius, developer of Lenovo Thinkpads: In his opinion, the tablet will not replace the notebook as a working device, neither in terms of performance nor stability. If the desire is not the father of thought. In any case, I also believe that sooner or later tablets will primarily replace netbooks, but also notebooks, as mobile work devices. Lightness is simply an unbeatable argument when it comes to mobility.

Does a dream have to remain light and efficient?

An alternative could be the highest devices that combine lightness and high performance and also come with correspondingly large screens: At 13 inches, you can almost work as usual. And they should also have a good battery. But of course they still weigh over 1 kg, in contrast to the iPad with a little over 600 grams, which is probably also due to the keyboard.

But apart from the fact that these devices have been almost twice as expensive as a tablet so far: aren't notebooks that use our previous habits and traditional working methods a step in the wrong direction? Wouldn't it be time to think computing fundamentally new, more innovative, more mobile and easier? There are already approaches to foldable screens, but this dream is not yet a reality. 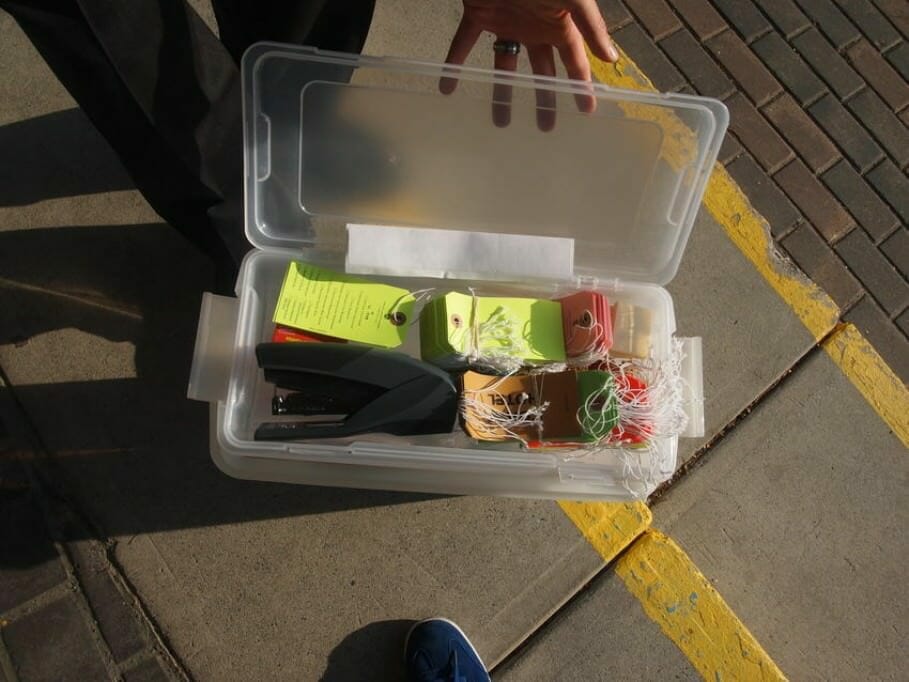 The future of work - just too short?

By the way, what I really still lack on the market: A really good camera with which you can take great photos and also handle your communication. Even if the trend here is more and more towards the light smartphone that fits in your pocket and takes really good pictures: With the many people I still see walking around with a large SLR camera, this could be a big hit ,

It became clear to me some time ago in Canada that we sometimes think too short about the future of work when I cross the Rocky Mountains by train. I noticed two exciting workstation variants: an office in a plexiglass case and a first-class restaurant kitchen that had to meet the requirements of a fluctuating train.

In the morning before boarding I meet Chris Cohoe, who is the chairman of the Rockmountaineer in Calgary and Lake Louise. And in this capacity, he has to travel the 150 kilometer between the two commons at each turn of the train.

Therefore, he has a particularly original version of the mobile office: a transparent Plexiglas case with various compartments, into which he sorted all his office utensils clearly. A grip, and Chris has what he needs.

It doesn't look as stylish as the leather suitcases that I see everywhere in business use, but it's incredibly practical because you don't have to dig around for the utensils, you can find them on a handle. Or as Chris says: “Its just handy.”

Later in the train, I meet Travis Catfish from Austin, Texas, who manages the kitchens at Rocky Mountanier. And that means for each of the two travel days once breakfast and once 3 course menu for the first class travelers - not a ready-made menu but a freshly cooked meal. 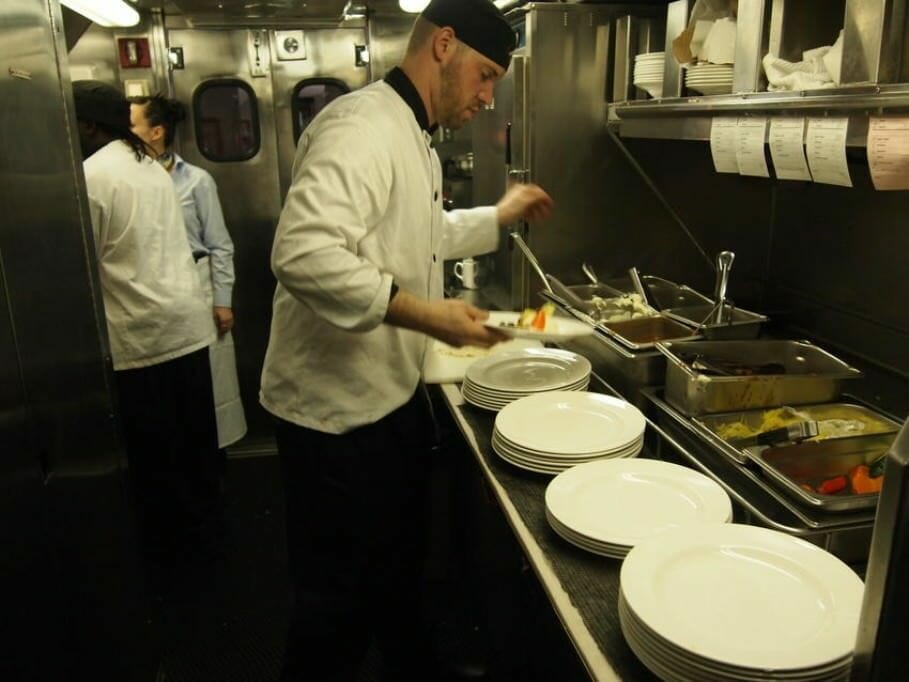 Cooking on a surfboard

Cooking for many people in a small space is not the challenge, says Travis, who has already cooked in 14 different restaurants. Rather, it is the constant swaying of the train that meanders through the Rocky Mountains: “If you are not careful, the food flies towards you. It's like cooking on a surfboard, ”says Travis.

His workplace therefore has some special features compared to other restaurant kitchens: there are mats to keep the dishes. And it is only cooked with electronics, not propane. "That would be too dangerous," says Travis. Of course, this is also the basis of the menu: You won't find any fried food, for example. 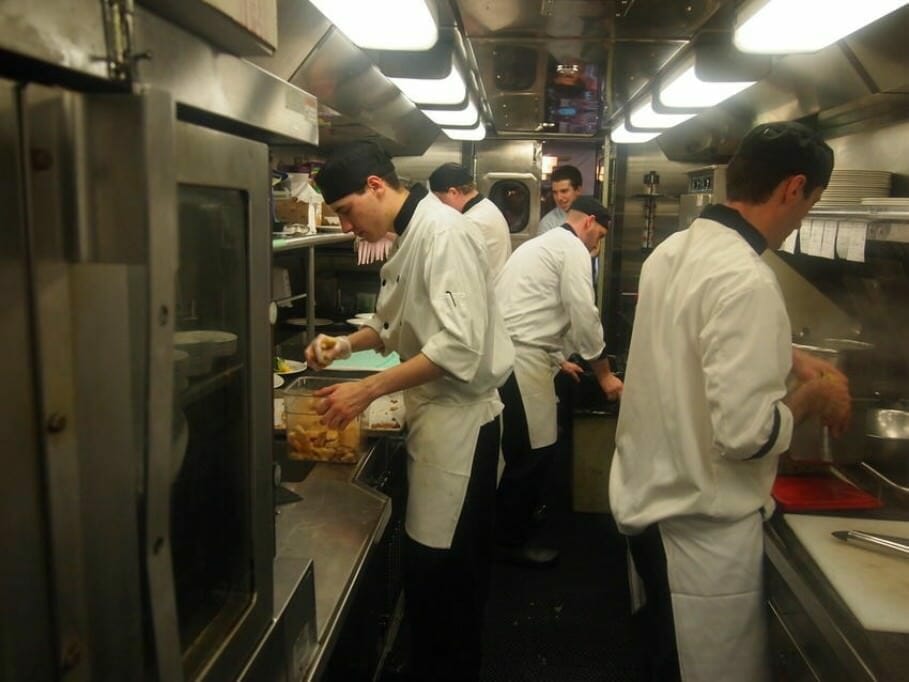 Kitchen workplaces of the future

In general, the food must not only be of high quality, but also practical: “We always plan two different menus for four days, each for the return trip from Calgary to Vancouver. At the stopover in Calgary, we invite the food out at night, ”he explains the logistical effort behind his work.

And why should it be any different with kitchens than with digital workplaces? They too have to be constantly modernized and adapted to the latest requirements.