During the triumphant advance of Facebook continues unabated - it already has over 500 million members - the German business network Xing is clearly losing ground. Apparently they are now trying to save what they can and want Facebook become more similar. But the shot could backfire - there are already first cancellations. 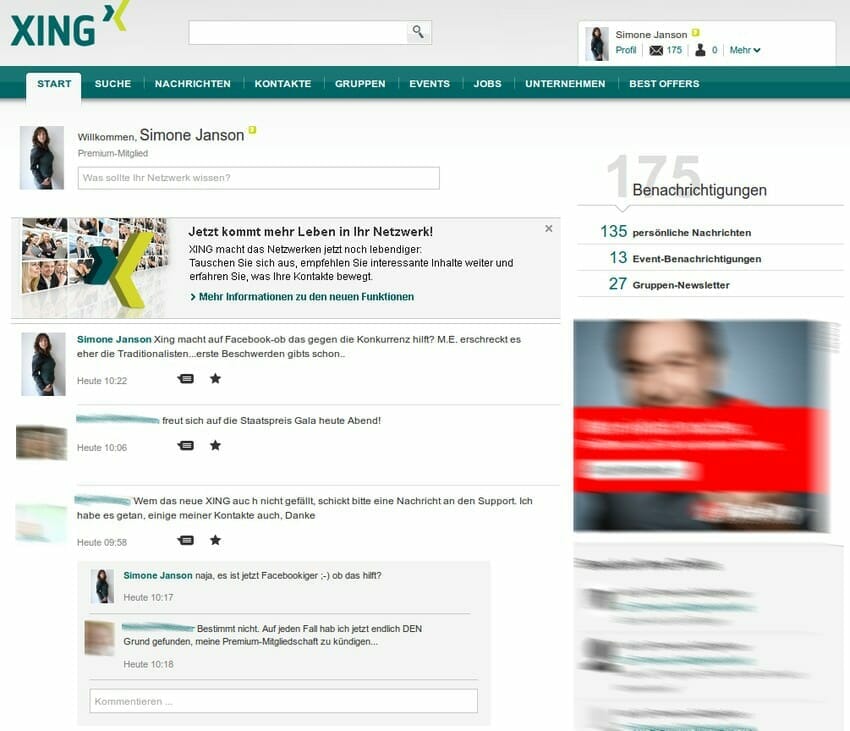 Content - More knowledge, PDFs books and personal advice here Hide
Rowing back to pick up members
Keep members at all costs?
uniebook is more communicative, Xing is clearer
“A reason to finally cancel my premium membership”
Xing shouldn't have a second Facebook breast
The end for Xing?
What's behind it?
The goal of “as many clicks as possible” was not achieved
Social signal

Rowing back to pick up members

The Xing against Facebook does not arrive, not only show the membership numbers - a comparison of user numbers from the year shows, for example, that Xing landed far behind in 9th place - but also Xing's strategy:

Only certain features like the message function and the status messages were also usable for non-premium members.

Keep members at all costs?

A clear sign that you want to keep members at all costs. Now Xing has a comment function, as it is from Facebook is known, built in. It should save the dormant network. But does that still help?

Honestly: I never really got to do much with Xing. Sure, you can accumulate contacts, I even moderated a group. But I never found really good contacts, exciting people, interesting orders there. The Sense I only got into social networks with Facebook and later discovered with Twitter:

“Are you at Facebook? ” I ask today if I want to keep in touch with someone. And people who have more to do with the Internet, I ask "What's your name on Twitter?" For professional purposes, I find Twitter much more useful because you can communicate there much faster and more precisely than in the sedate Xing groups.

But maybe I'm just not the right target group for Xing. More conservative industries are likely to appreciate this more sedate communication style. And they probably appreciate one thing above all: the clearer operation and data protection, which Facebook can be very questionable.

“A reason to finally cancel my premium membership”

And this is exactly the advantage that Xing could use with the new comment function. Apparently some users feel overwhelmed with the new ad. Some may even be bothered by the fact that they now have the status messages directly on the presentation plate, while others may find that you are now facing a constant compulsion to communicate.

Because it was precisely the quieter slowness and data protection that made Xing more attractive to many than Facebook. And so the first complaints and threats to leave “… a reason to finally cancel my premium membership” did not go away.

The anti-maintenance has surprised me, but shows just why the people are on Xing. On the other hand, I was also quite confused when I opened Xing yesterday and discovered the new function.

When I faced Facebook discovered, I asked myself why this ingenious pinboard function isn't also available on Xing. Now that they are on Xing, I think they are simply superfluous. ME that comes years too late: Facebook, and also Twitter for sworns, established as an exchange medium.

Xing, on the other hand, is the quiet address book backup where you can conveniently export contacts and appointments, and for many, this is the number 1 page if you want to learn about a resume. And now that!

The end for Xing?

The attempt to contact Facebook aligning is just another strategic mistake that Xing makes: After the IPO, with which the company slowed down its own growth at an early stage. And after the unsuccessful international expansion, where, for example, cultural customs in Asia were simply overlooked and where you just look old next to competition like LinkedIn. So it's no wonder that Gründerszene Xing is one of the German companies that will no longer exist in this form in 2015.

After all, there are also setbacks. So the business network gave up its “Topics” feature. This is also linked to a social signal: the users apparently did not want to use another feature. There was also a modest message from Xing, which describes itself as Germany's most popular business and recruiting portal. It was written in a nutshell:

The area of ​​XING topics is below our expectations, so we have decided that End beta phase of XING topics and no longer offer this function.

I found Xing Themes one of the platform's more innovative new tools. A kind of blog in the social network with extensive tagging function. And one on which I noticed real interactivity on Xing for the first time when I looked at the reactions to my postings.

But that was exactly the problem: I only used Xing topics because at the beginning you could still import blog posts via RSS feed. A practical autoblogging function that, with the automated tag function, goes far beyond the capabilities of Facebook went out.

The goal of “as many clicks as possible” was not achieved

Xing apparently did not want his users to simply simply download their blog posts; it wanted interaction, activity and as many clicks on the page as possible. Like all social networks.

The RSS import function was soon closed again. “That doesn't make Xing more attractive for bloggers,” someone said at the time. He should be right. Apparently, users simply don't feel like using another feature.

Saying goodbye to Xing topics is also a sign of general social media fatigue, especially among business networks - a social signal, so to speak, that the social media hype is losing a lot of water.

Time for the subject to be steered more calmly instead of being constantly chased from one gadget to the next, which we think we have to try.