Usually I do not look Anne Will. Yesterday was not just about a job-related topic - stress, pressure, Bullying - The boss as an enemy - no, one of my authors was also a talker, so watching is a must. Only: Enthusiasm is different! 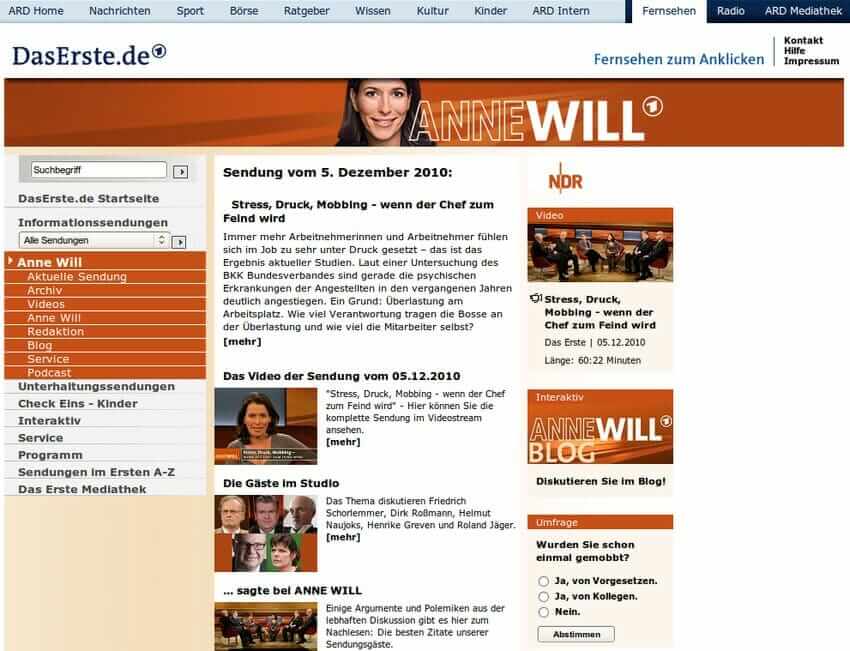 Where blood flows, there are also spectators

Afterwards you are always cleverer and so I know again why I usually do not watch Anne Will on Sundays and otherwise avoid talk-rounds like the devil does the holy water. Because the strategy is always the same - and with critical, subtle political talk yesterday had little to do!

On the chairs guests from different camps are sitting in the hope that they will get into the wool as proportionately as possible. Because where blood flows, there are also spectators. And every talk guest has his role.

By the way, I know that from my own TV talk round, to a far less controversial topic, namely perfectionism. Even then we were not so dissatisfied, but who knows how the hare ran, can score in such a show with good rhetoric - while you squat totally nervous on his chair and the adrenaline shot through the veins.

At Anne Will, the roles were clearly divided: Employer's attorney Helmut Naujoks, who helps to get rid of even non-terminable employees, was the bogeyman. Also management consultant Roland Jäger, started with the thesis that many bosses are just too cuddly-nice, sat next to Naujoks rather in the evil corner to the right of Anne Will (so was actually already the division in the studio created).

On the left sat the good guys: entrepreneur Dirk Rossmann, theologian and journalist Friedrich Schorlemmer, and ver.di district manager Henrike Greven. Since you can watch the whole show below or later in the media library, I limit myself to doing opinions Kund - not only mine, but also those who came up in the discussion.

The roundtable was a great example of how the media, and television in particular, live on simplification, polarization and polemics - and that everything else does not work (unfortunately) in such a format. Actually, everyone agreed at the beginning of the show that they would have to look at the topic in a differentiated way ... but that soon changed.

Pale and a little old-fashioned in the discussion was the ver.di lady. Mr Schorlemmer probably had the most grateful role in being able to protect the workers in a calm, objective and differentiated way. You do not have to say anything about Mr. Naujoks: he looked visually very nasty and was the bogeyman of the show.

The "star" of the evening, however, was Dirk Rossmann, head of the same-named drugstore chain. Rhetorically trained, he liked to tell others about his mouth - quite the knight without fear and blame in the fight for workers' rights. Just the boss you want!

I'll tell you straight away, I'm a bit eccentric out of my own bad experience when people make themselves nice. Now Rossmann may even have been awarded and even negative media opinions (such as Schlecker) one looks for him in vain. However, not all employees are enthusiastic, as can be read on the Kununu employer rating platform.

So I found it a bit wrong, as Rossmann the management coach Roland Jäger anging - because actually both campaigned for a fair deal with employees and also Rossman admitted that not everything could always be vain sunshine.

One can certainly argue about Hunter's somewhat unfortunate expression "rotten eggs", but in principle he sought an honest, differentiated analysis of the situation in many Company, Unfortunately, there was simply no time in 45 minutes - and admittedly, Rossmann was just more entertaining!

What disturbed me the whole program: Once again all stereotypes were served! A consistent management style was associated with a drama with threats and pressure build-up. But these are the negative examples! I've already thought of that in advance!

Unfortunately, as the comments on the show show, it still works excellently, because it is not a matter of factual arguments, but emotional antipathies against Naukjos and also hunters. Twitter was fortunately partly more differentiated.

I think you have to make the whole topic more differentiated, after all, it's quite complex!

Consistent leadership consists primarily in the fact that my boss takes responsibility and sometimes unpleasant decisions that may not bring him the love of his employees, but perhaps respect - and the long term for the whole company and all employees are good.

Being boss can be lonely

Being a boss can finally make you lonely, but I also have several examples among my friends: those who climb up, for example, are not invited to parties by their colleagues because the situation is different - no matter how much the boss tries to do justice to be friendly and sympathetic.

On the contrary, a boss, who then constantly tried to come across as sympathetic, would look in my eyes only ridiculous.

Incidentally, I do not have the big companies in mind, in which certainly a lot is in trouble, but small companies that often get along with only a few employees and are also under constant pressure, for example against the competition.

And by the way, with a lot of effort, to start up a business of their own, in a country where this is far from easy, as I know from my own experience. After all, as a self-employed person, one is often considered crazy, many wonder why he does not apply for Hartz IV immediately. I have also written about it several times.

And I think of my own bad experience with a boss who simply could not formulate any clear expectation and orders for low prices, because he does not have the sense of self-confidence in negotiations. Therefore, he is then forced to exploit his employees all the time. Not even the yellow of the egg!

Incidentally, this is not so uncommon in the media industry in particular that bosses are particularly relaxed and hip - and in reality they are not. This is part of the young, trendy myth that surrounds this industry - and every year, again, seducing young people into working as cable carriers for free. Top!

I just think of Konstantin Neven-Dumont, whom I was allowed to experience live two weeks before his inglorious debunking by Stefan Niggemeyer: Overall, few concepts for the online strategy of the company but also seeing himself as a philosopher - I would have in the lecture simply more facts desired.

Every jeck is different

Personally, if ever, I would ever want to see a boss whom I could respect due to professional competence and sense of responsibility. Whether the hipp is over and can talk great, I would not care.

But that's exactly the point: I have problems with people that I can not respect. Maybe other people do not care. People like and need different leadership styles, and every boss is different. Therefore has Roland Jäger completely right: One must be able to choose his boss!

Of course, he was interrupted immediately, arguing that then always comes: "People have no choice!" I believe, and from my own experience, that you always have a choice - even if it is safe sometimes hard. But that includes courage and commitment to change something in a situation.

This is what Günther Wallraff says (after which, in the comments on the Anne-Will program, he was repeatedly called). That was for his reportage about the conditions at a Lidl supplier also criticized as a jobkiller Service. In his opinion, the people are that they are out there now. Motto: Better no job than a miser.