Text comes from the book: “Foreign exchange trading: Earning money with fluctuations in exchange rates” (2007), published by Münchener Verlagsgruppe (MVG), reprinted with the kind permission of the publisher.

Dennis Metz is a non-fiction author.

Since there has been money, there has also been a need to exchange money of different origins (i.e. currencies) for one another. But the currency market has only existed in this form for a few years. A few basics. 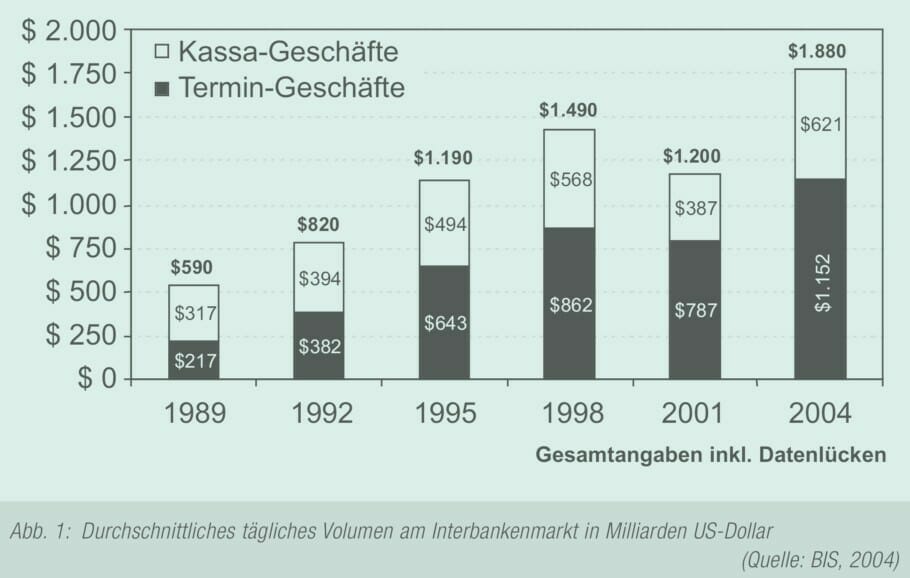 History and current development of the foreign exchange market

Life without money is inconceivable today because it fulfills a multitude of functions: it is a recognized medium of exchange, a computing unit with which goods and services can be compared, and a means of storing value.

Before "money" took on its current form, it had gone through several thousand years of development. The first means of payment dates from around 4500 BC. At that time silver was used as a means of payment. The first price lists were probably around 1500 v. BC used. Coins first appeared in the seventh century BC BC. In contrast to today's scraps, the precious metal content of the currency coins at that time corresponded to their face value. Paper money was probably invented in China in the ninth century, but it has only been used in Europe for around 300 years.

The origins of the foreign exchange market

The recent history of currency trading has its origins in the gold standard. This existed with a brief interruption between the two world wars from around 1880 to 1939. In the gold standard system, a currency was secured by gold holdings. A bill represented a claim to a certain amount of gold. This exchange ratio between money and gold was constant. Since the price of gold is more or less identical around the world, there were also fixed exchange rates between the individual currencies.

The problem with the gold standards

The gold standard system collapsed during World War II as a result of uncovered increases in funds. The banks issuing banknotes no longer ensured that the money spent was covered by the corresponding amount of gold. Thus the money supply grew, while the gold supply remained constant.

The gold standard was eventually replaced by 1944 through the Bretton Woods Agreement. In this international system, gold was no longer used as collateral for a currency, but the US dollar. The participating currencies could be exchanged at any time in a fixed relation (+/- one percent) to the US dollar. Thus, the exchange rates between individual currencies were also fixed. US dollar holdings, in turn, could be exchanged for gold at a fixed rate (35 dollars per ounce). The gold-backed US dollar thus served internationally as the leading and anchor currency.

From the BrettonWoodsSystem to the European exchange rate system

The BrettonWoodsSystem lasted over 25 years. In the course of the 60 years, however, the United States' current account deficit widened significantly, and diverging growth rates between the participating countries created tensions. 1961 finally saw an initial adjustment of the exchange rate between the German mark and the US dollar, and at the end of the 60er a number of further adjustments. At the beginning of the 70 years, the system finally collapsed.

After a transition phase, the European Exchange Rate Association was finally founded. The system, also known as the »currency snake«, was characterized by close parities (+/- 2,5 percent) between the individual currencies within the European economic community. Exchange rates against the US dollar, on the other hand, were already flexible. The system only lasted until 1979 and was eventually replaced by the European Monetary System. There were no longer any fixed exchange rates between the European currencies, but fixed relations between the individual currencies against the fictitious currency basket ECU. The value of an ECU was calculated from the weighted average of a specified basket of currencies from the participating countries.

Maastricht Treaty: the basis for the euro

In the Maastricht Treaty, 1991 finally laid the foundation for the European common currency, the euro, which replaced the national currencies of the participating countries. The euro was finally introduced to 1999 and replaced the ECU. Since then, flexible exchange rates have prevailed among the most important currencies.

In the course of globalization, the volume traded has increased significantly in recent years. The average daily volume on the foreign exchange market was still around 1989 billion US dollars. This rose to an estimated 590 billion USD per trading day in 1.880. Hedge funds, among others, are held responsible for the strong increase since 2004. But the increasing perception of foreign exchange as an asset class has also supported the strong volume growth.

Market participants and reasons for transactions

Central banks also participate in ordinary currency trading. Furthermore, from time to time central banks intervene in the market with the intention of moving the exchange rate in a certain direction and correcting a supposed market disturbance. This is also known as intervention and, as a result of the central banks' market power, usually results in a violent exchange rate movement. However, studies have shown that these interventions were usually only temporarily successful.

The influence of classic (voice) brokers has decreased significantly in recent years, as more and more volume is traded via electronic trading platforms such as EBS. Especially when it comes to exotic currencies or large sums, the phone is still used, but in everyday trading the proportion of electronic systems is already an estimated 90 percent.

Although the share of real economic transactions cannot be determined beyond doubt, it is estimated to be a maximum of ten percent of the volume, with most sources assuming less than five percent. These transactions can largely be traced back to international groups. As part of globalization, large industries and service companies come into contact with a variety of currencies. Since goods and services are often billed in the local currency, the Company increasing need for currency transactions.

One of the main differences between trading stocks and foreign exchange, for example, is how you trade. While stocks are usually traded on a stock exchange, foreign exchange is traded "over the counter" (OTC). There is no marketplace that bundles supply and demand like an exchange, but the trading partners trade directly with one another. For example, if a bank wants to complete a foreign exchange transaction, they call other banks until they have found a trading partner for their transaction. Alternatively, it can also use one of the electronic brokers that bundles at least part of the global supply and demand, but is not directly comparable to an exchange. The interbank market can thus be imagined as a network that links the largest market participants with each other. If you are not part of the network, you need an intermediary (for example a broker, who in turn must be part of the network) to trade foreign exchange.

This results in a number of differences from trading on a stock exchange. For the private trader, this primarily consists of the trading hours. For example, trading in the interbank market is not subject to any time restrictions, such as those imposed by the trading hours on the stock exchange. Foreign exchange is traded around the clock - from Monday to Friday. Only on weekends does the retail stand still - although here, too, transactions theoretically come about when there are two trading partners.